As I’ve written many times before, I used to be a player back in the day. You may think that’s an idle boast, but it isn’t. I say it not as a matter of pride, but a simple fact. Being a player isn’t a matter of looks, money, style, or sexual prowess- it’s a matter of attitude. It’s in the way you act, the way you talk, and the way you present yourself to a woman. It’s a matter of what you say, and how you say it. Anyone who says different doesn’t know what he’s talking about.

To be a true player, you only need two things: the manners of a gentleman and game. That’s pretty much it. A woman only needs to think you care about what she has to say, whether you do or not is completely at your discretion. When it comes to me, yeah- I do care about what a woman thinks. I mean, everybody wants a beautiful face and a nice rack, but at the end of the day, unless you’re looking to get laid, you need to have something to talk about.

Getting your foot in the door isn’t the hardest thing; all you really need to do is start talking. No matter what your confidence level is, most girls will talk to you as long as you don’t come off like an arrogant prick or start slobbering all over her. For example- just recently, I was hanging out with some friends at a trendy bar called the York when I walked up to the bar for another drink. I stood next to this really cute brunette and cracked a joke that she laughed at, and from there, we struck up a conversation. Ten minutes later, she gave me her number. I wasn’t even trying. She thought I was hysterical. I guess it’s nice to know my old skill set hasn’t faded on me.

Being able to make a girl laugh is the easiest way to get her into you. If you’re somebody like me, it’s like breathing- it comes naturally. Once I get a girl chuckling hard enough to crack a rib, I know it’s on. But that’s not to say it’s always so easy. Sometimes you get a harder nut to crack.

In case I neglected to mention it, just because you can make a girl laugh, that doesn’t necessarily mean she’s into you. It just means you caught her attention. In order to secure her interest, you have to show her there’s more to you than lame jokes. It’s a start, nothing more. You need to have something more to say. That’s why it’s always important to do more listening than talking. Women will never openly admit it, but all they really want at the end of the day is someone who will listen to them.

The thing you have to understand about women- they will talk without ever actually saying anything. Women, as they say, are a mystery wrapped up in an enigma. That being said, here are some vital clues to help you know when the game is afoot:

1. She bites on her bottom lip.

This one is a little subtle in that if you’re not paying attention, you might miss it. The bite is usually accompanied by what I like to call the ‘hungry eyes’- a look a girl gives that says, “I want to swallow you whole!” As far as signs go, this is the gold standard. If you get the bite, it means that you’re pretty much guaranteed a number and a first date. If you don’t blow it, that is.

2. She touches you on the arm.

Okay, now this could happen in one of two ways and has different meanings. If you get the shoulder touch, it means that she thinks you’re cool enough to hang out with and possibly be friends. It’s a subtle way of getting friend-zoned. However- if she grasps your forearm, then it’s a done deal. It means she’s interested and has every intention of seeing you again. So if that happens, my suggestion is to come up with a plan for a first date.

3. She looks back as she walks away.

While this one isn’t as reassuring as one would hope, it at least conveys the message that she likes you and will run into her again. Depending how aggressive you are, you can choose to ask for her number straight out, or if she happens to be a regular where you met or has a mutual friend, then chances are, you’ll see her another day, so don’t panic.

Now keep in mind, nothing in life is guaranteed. These are just indicators to let you know what might be possible. Don’t start thinking it’s in the bag because she will slap you down hard if you’re too forward. My advice? Play it cool and follow her lead. The best thing you can do when chasing a woman is to let her come to you. 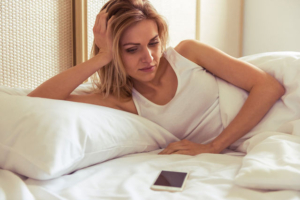