A while ago, I wrote an article here called, “A Question of Integrity”, in which I basically vented my frustrations when my motives and intentions were being scrutinized without cause, or so I thought. I probably shouldn’t have been so defensive, but the truth is, in the last fifteen years or so, I’ve worked hard to redeem myself for my past sins, so when someone comes along and questions that, it bothers me, a lot. It makes me feel as though nothing I’ve done has made any real difference whatsoever.

I suppose I did bring it on myself, but I guess I just sort of thought that the person who questioned it should have known me a little better. Probably explains why it hurt me so much.

Look, I never claimed to be a perfect person, and Lord knows I’ve done stuff I’m not proud of, but all I’ve ever wanted to do was help, and I have, sometimes to my own detriment.

But really, what is a motive and an intention? A motive is a reason for doing something, whereas an intention is a plan to carry out a certain goal. That being the case, my motives and intentions for doing anything are always the same; I just want to help because I can.

The thing that separates them from being ‘bad’ or ‘good’ is a matter of whether or not you’re doing it to benefit yourself. When I think of what I’m doing at the moment, I can tell you right now, there is absolutely no benefit to me whatsoever. In fact, I might just be pushing myself harder than I can afford to.

The thing is, I made a promise, and it means everything to me to keep it.

But beyond that, if you consider yourself to be ‘good’ or ‘honest’, then I think it’s important to keep these things in perspective. I’m not saying you should question yourself the next time you give a dollar to a homeless guy, merely that, for instance, when you’re in a relationship or interested in someone, if you do something nice for them, is it because you want to, or do you expect them to reciprocate?

If the answer is yes, then you might want to take a long look in the mirror. On the flip side, if you’re the kind of person who thinks that things should be done for them purely based on who you are or that you think you’re ‘worth it’, well, I highly doubt you are.

There’s nothing wrong in knowing your own self-worth, but being vain and selfish are two very different things. Humility is a lot more than just letting your ego grow out of control; it’s about being giving.

I dunno about you, but I’d rather help out someone who needed it than waste time on someone who’s just going to take whatever I do for granted.

Don’t read this and think I should be nominated for sainthood. I’m not out to save the world, I’m only one man. But that’s not to say I wouldn’t try. I just do it one person at a time. 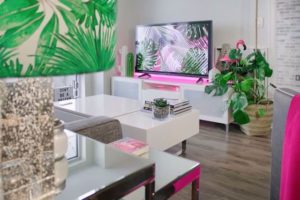 5 Chic Ideas to Add Tropical Colors Into Your Home
Some fabulous ways to brighten up your home.