I can admit it. Yeah, I was a player in my youth. Not necessarily because I wanted to be, but because I needed to be. I needed something to keep my mind off of my broken heart. Some guys drown their sorrows in drugs and alcohol. Me, I consoled myself in the waiting arms of women.

That’s not to say I slept with tons of girls- far from it. It just means that I dated a lot. I was what they called a ‘serial dater’, a guy who jumps from woman to woman and doesn’t settle for any one person- constantly looking for that greener pasture. And while that may be true for a lot of guys, it was never true of me. I never cared about the quantity of women I had sex with or what might be waiting around the bend. All I wanted was to find the connection I had lost. I never did. At least, I didn’t back then.

The crew of guys I ran with- they were a different story altogether. Whenever we hit the bars and lounges, we had a code we lived by: “After three, it’s all free.” The basic gist of it was that if you didn’t or couldn’t hook up with someone by three in the morning, then you had to go home with whoever was left and willing at the end of the night, and pray you didn’t hear from them within a nine-month span of time.

Now luckily, I was never the last guy standing, mostly due to the fact that I was the best wingman in the group. My partner was my friend, Juan, who always got the best girls in the place. So most of the time, I was usually guaranteed the hottest or drunkest friend. Of course, that’s not to say I didn’t have to take one for the team on occasion. When that occurred, I always managed to find a way out if I needed it. Other times, I had to either wait around in the cold or play the lookout, which would have been fine if I’d been able to bring a book.

I realize that all of this sounds rather shallow, but you have to understand that I was a kid at the time and just looking to see what else might be out there, along with trying to dull the ache in my heart. The funny thing is, I always knew I’d never find what I was looking for in the places we were hanging out. It was kind of stupid to hope that I’d stumble into the depths of my soul while fishing in such a thin pool.

Just about the closest I ever came was when we were at a strip club and I met a dancer named Shelby, who took an instant shine to me. She thought I was funny, cute, and talented- more so when I showed her some of my short stories. We dated for a few months until she moved to England with her family, and though she asked me if I would come with her at one point, I decided to stay in LA.

So I kept going out, kept looking around. Never found what I was looking for. It kind of felt like the universe had turned its back on me. And it stayed that way for a LONG while.

Then I settled, which was the biggest fucking mistake of my life. I got into a relationship that basically sucked at my very life and my creativity. Once that was done, I drifted around, and I even went so far as to try to go back to my player’s ways, with a new partner in tow. Still, it never amounted to anything.

Then the universe gave me back the one thing I’d been searching for. Maybe. I’m still trying to figure it out.

Anyway, you’re probably wondering if there’s a point to this story, and I wish I could give you a clear-cut answer. Being that it’s currently after three a.m., I guess you’ll have to ponder that on your own.

All I can tell you is that every experience adds to your own wisdom, and the only way you gain that wisdom is by making mistakes and learning from them. That’s how we grow. I may have been a player in the past, but spending time with all of those girls taught me one very important lesson- sometimes you have to travel a very long road to reach your destination. And when you finally find the thing that you’re missing, you better hold on to it with both hands and never let it go.

Because it may never come around again. 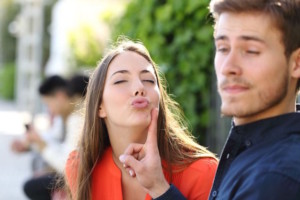 The Imagined Relationship
My first thought? “After one date?”