I had a stroke last month.

Do me a favor, spare me the pity and the platitudes. I appreciate them, but they’re not necessary. I don’t need them. I was lucky in that I only lost movement on my left side. My cognitive functions and memories are fine.

Physical rehab was tough, but I managed to get through it because I had no other choice but to lay down and die. Now I’m back on the road to recovery, and I think I’m gonna make it. I’m not writing this article to educate anyone about stroke- I’m writing it because of the effect it had on me.

Before the stroke, I had a lot of anger issues and anxiety. You could piss me off at the drop of a hat, basically. Even when I was at rest, I still had this low-level irritability I could never get rid of. I was a coiled spring, ready to pop at any moment.

I took a lot of anger out on my friends and family, the people I loved the most. On some level, I felt bad, but honestly, not bad enough to actually care; I just wanted the least amount of drama possible.

Still, there was this part of me that cared- a part of my personality that I thought I’d long thought buried. A part of my soul that’s more on the poetic, sensitive side of me. For a while, it helped me write and say a lot of things in my heart that I otherwise would have kept buried.

The longer it went on, the more embarrassed I became. I had built this reputation as an asshole to everyone I know, and I didn’t want to change that. Besides, that stuff was pretty much written for an audience of one, anyway. After things soured, I put the poet back in the ground and vowed never let him see the sunlight again.

When the stroke hit, I went through the requisite emotions- sadness, anger, depression, denial, despair, blah, blah, blah. At one point, I even thought about suicide, but never seriously. When such a thing happens to you, the dark thoughts come in and can overwhelm you if you let them.

As I was saying, I was lucky- I was put in a facility with people who truly cared about my rehabilitation. I decided to embrace my recovery. I’ve managed to get a lot of my mobility back, though I’m not at a hundred percent yet.

The funny thing is, after a while, I started getting a little philosophical about the stroke. First of all, nobody could explain one of my symptoms or why none of my mental functions were affected. Another weird thing is that most of my aggression and anxiety were gone; for the first time in years, I felt… at peace. I felt whole.

I meditated on it for a bit, and I came out with the understanding that the stroke gave me something back- the ‘poet’ side of my personality.

As hard as I fought to keep him buried, he found a reason to claw his way back into the sunlight in the form of stroke. Maybe I’m crazy, but it seems like a reasonable explanation to me.

Going through rehab, in the beginning, was hard, and working simply to get home wasn’t enough to keep me motivated. But then I reached out to find a ray of sunlight to keep me going, and that sunlight pushed me harder at times when all I wanted to do was stop.

So why am I telling you any of this? For a couple of simple reasons- one, what you may think of as a curse can turn out to be a blessing; and two, in the darkest moments of your life, it only takes one ray of light to touch your heart to give you strength. You can move mountains with it. 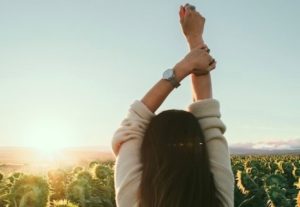 Rebalance and Nourish Your Body With This Monday Through Thursday Guide
Some great tips to feel amazing throughout the week.