I’m an introspective person, which basically means I spend a lot of time thinking about me. Not that I’m egotistical or anything, I just like dissecting my thoughts and feelings. A lot of people have told me I think too much, but I figure, if it makes me a better person, what’s the harm in it? If anything, I’ve gotten to know myself better than most people. I’m relatively secure with who I am and what I’m capable of. But that doesn’t mean I can’t be better, which is kind of what I’m working on.

See, I’ve always been… well… some people would say ‘negative’, but I don’t see it that way. If anything, I’m more of a realist. I see things for what they are, not for what I want them to be. I think having an unrealistic, ‘shiny and happy’ existence is self-delusional. And we have far too much of that shit already. The only problem with being a realist, however, is that it gives you a very bleak outlook on life. For the last few months, I’ve been trying hard to change my viewpoint to where I can look at the positive side of things while still being realistic. Believe me, it’s a lot harder than it sounds.

In my previous article, I talked about my feelings towards love and what it meant to me. Looking back on it now, I see that I didn’t really get into how I feel about love so much as giving my perspective on it.

In all honesty, when it comes to love, I’m like everyone else- I have no clue. I just go by the general idea of what love is and go from there. I mean, I know what I want and what I’m looking for, but finding it has always been problematic in that if I don’t see it in the person I’m with, I walk away. It has nothing to do with attraction or compatibility; it’s a chemistry thing. Don’t get me wrong- I give it a decent chance, but if it ain’t happening, it ain’t happening. And if it ain’t happening, then I’d rather stay single.

People have told me I’m being too picky, but I’m really not. I just want to find a spark- the one that tells me ‘she’s the one’. I found it once- my soulmate. I have to believe I can find it again.

Very recently, someone asked me, “If you have a soulmate, then why aren’t you with her?”

I answered the question by saying my soulmate is married with two kids, though we’re still good friends. But that wasn’t the whole truth. The truth is, my soulmate and I have had multiple chances to get back together, but circumstances usually conspired to keep us apart. Or at least, that was the excuse I kept telling myself. After having this conversation, I gave it some deeper thought.

I have to admit to myself that as much as I wanted this person back in my life, I wasn’t willing to trust her to be faithful to me. See, we had a bad break up back in the day, and she has a very hard time with monogamy. I could have easily taken her back anytime, but keeping her from straying would have turned me into something I never wanted to be- a jealous control freak. I want to be with someone I can trust, and without it, you have absolutely nothing. Which is when I realized that trust is my big issue in relationships. You can love someone as much as you want, but it doesn’t mean very much if you can’t rely on them not to break your heart.

I guess that’s why I’ve been so reluctant to get involved again. Recently, I’ve gotten close to someone. I have very strong feelings for her, which I was upfront about from the start. But the thing is, even though I’ve committed to being friends, she still questions my motives and intentions despite my never having done anything to make her think otherwise. I can’t say it doesn’t bother me because it does. I don’t like it when my integrity is questioned. I mean, if you don’t know me, that’s fine. But she should know me a lot better than that by now.

I mean, it’s not like I cat around with every hot girl I meet or start humping the leg of my female friends. So where this girl got the idea that I wanted more than she was willing to offer is beyond me. The last time I checked, the name on my driver’s license wasn’t Bill Cosby. I know, bad joke, but that’s kind of the point- that’s not the sort of person I am.

For example, I have a friend named Darrah, who one day posted on Facebook that she had an extra ticket to see a screening of RAIDERS OF THE LOST ARK and asked me if I wanted to go even though we’d never met in person. Being a movie lover, I jumped on it. I assumed Darrah would be bringing her boyfriend, but she explained he was out of town on business. I was like, “Are you sure you’re okay with this? I mean, you don’t know me from Adam.”

Darrah laughed and said she was fine with it. I wish I could say I felt the same. I wasn’t comfortable being alone with her. I mean, if I had a super-fine girlfriend (who was eight months pregnant, by the way,) who wanted to meet up with a perfect stranger, my first impulse would be to say, “HELL NO” and hide her car keys. I told Darrah to give my name and number to her boyfriend so that he knew whom she was with and could contact if he needed to. She said it wasn’t necessary, but I insisted.

All in all, we had a fun time. We hit it off as soon as we met, and the only time it got slightly weird for me was when Darrah rested her head on my shoulder during the movie and then asked me to massage her back because she felt uncomfortable sitting up for so long. After the movie was over, I walked her to her car, gave her a hug goodbye, and said to call me and let me know she got home safe. She laughed and said I was being overprotective. I said, “No, I’m being cautious. If I were being overprotective, I would have insisted on driving you home and then cabbing it back here!”

Now, you’re probably wondering how telling that story relates to my feelings about love.

Well, I’ve come to realize that while I want to be in love with someone, I think at this particular point in my life, I need to have three more important things: trust, support, and loyalty. The girl I have feelings for, she thinks I want her to feel what I do and have it turn into a full-blown relationship. I don’t, or at least, not right now, if ever. I’ve told her many times- No matter how much you care for someone, you can’t make them feel the same if they don’t. I can be in love with her and still be friends because I need her friendship more than I do her love. Don’t get me wrong- I would drop dead from happiness if we went from friendship to something more, but at the moment, there are things that I need to do on my own.

I would love to have her on this journey I’m on, but I find I work best alone. What I need from her is what I’ve given this whole time- my trust, my support, and most of all, my loyalty. In all the time I’ve known her, I’ve always thought of her as a friend, a partner, and a collaborator. I’ve shown her that I have always had her back and would do anything for her. I’m not asking her to love me- I don’t need it. I’m a self-contained unit.

Sometimes, love is as easy as knowing you have someone who cares enough to want to be a part of your life. 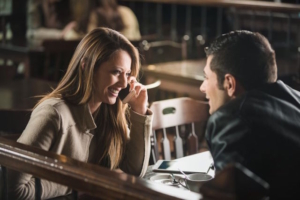