I’ve never been one of those people to feel the need to rely on romantic advice columns. I’ve always thought that if you did, being in a relationship probably shouldn’t be your main priority in life. Kind of weird when you stop to realize that I write for a lifestyle and relationship blog. But that’s a whole other story.

I mean seriously, if everybody followed the so-called ‘do’s and don’ts of dating’, the human race would die out. There would also be no use for alcohol. And really, do these ‘experts’ have any real experience to begin with? Most of them are either single and divorced, and the ones who aren’t can only give their advice based on their own limited experience with what works for them. What happens when a relationship between two crackheads goes on the rocks? What kind of advice can they give, then?

Don’t get me wrong, I’m not saying it doesn’t hurt to have an outside perspective sometimes. I’m merely suggesting that you should take their advice with a grain of salt.

When seeking advice, you shouldn’t take it as gospel. Like I said, what works for some people doesn’t necessarily mean it will work for you. The best thing you can do most of the time is take it at face value and glean from it what applies to you, personally.

About the best piece of advice I have ever gotten was given to me when I was living in Oxford, England, by my host mother’s father, a kindly old gentleman named, Cliff. After I came home late from a date, I was feeling torn up about my feelings for this girl. Cliff pulled me aside and instead of beating me over the head with ‘old people wisdom’, he poured a couple of glasses of this horrible tasting whiskey and patiently listened to my problem. When I was finished, he gave me the one piece of advice that has pretty much defined how I have lived my life.

He said, “Gregory, always listen to your heart, for it will never lead you wrong.”

I know it sounds kind of simplistic, and it hasn’t always worked, but for the most part, it’s lead me to some interesting places in my life. It lead me here to ACW, for example. Now, I’m not suggesting that you give in to every emotional or romantic impulse- I mean, don’t go chasing after that hot biker on impulse because you think he’s totally sexy- I’m just saying you should use your intellect, instincts, and common sense with your heart taking the lead.

Far too many people act on impulse without thinking things through these days, and then there are some people who over-think everything and adhere to all of these silly, made up rules that accomplish nothing but keep you from finding that one person who might bring you happiness.

The human heart isn’t just a muscle; it gives us compassion, guides our choices, and keeps us honest and humble. I won’t lie to you, love is always a risk, and you may get your heart broken, but if you stop listening to it, the chances of you finding that one person gets that much smaller.

Sometimes, you have to have a little faith. 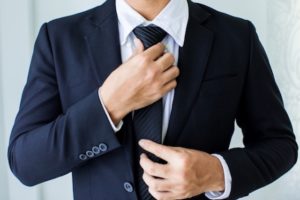 How To Build A Man’s Business Suit Wardrobe
Some great tips for the perfect business suit wardrobe.