Hello, kiddies. It’s me again. And before you roll your eyes, no- this ain’t gonna be another group therapy session where I confess my feelings and confront past traumas. I’ve had enough of that for now. Maybe later. Tonight, I wanna get back to the funny. So let’s jump into my mental wayback machine and take a trip to the year 1993…. A time when MELROSE PLACE was the thing to watch on Monday night, “Even Flow” from Pearl Jam was the only song on the radio, and the Rolling Stones had announced their ‘final’ farewell tour for only the second time. Where I was a strapping and dashingly handsome young 22- year old lad, and Anne Cohen had yet to sprout boobs.

At the time, I was in college, and the spring semester had just begun. Like every other twenty-something with no clue as to what to do with his life, I dabbled in different classes trying to find something I could gravitate to. Which, in this particular case, was acting. The acting bug never really bit me, and by and large, most of the actors I know are vain, full of themselves, and total poseurs with no real talent whatsoever. I took the class for the same reason I did anything back then- girls.

One of the first things we had to do was ‘audition’ for the class, meaning that we needed to perform a mime exercise where we acted out a physical activity, and the class had to guess what the activity was. In my particular case, I pretended to be playing golf. Being that I’m a humorous type of fellow, my bit was to walk up to an imaginary golf tee, take a swing, and look to see where the ball went, only to find that I never actually hit it. Then I tried one more time, and the imaginary ball stayed on the tee. After several frustrating attempts, I finally picked up the ball and threw it onto the fairway. Everyone thought it was hilarious. Needless to say, I was the big hit of the day.

I also caught the eye of a girl named Renee.

Renee was a cute blonde- short hair, blue eyes, and in every way imaginable, adorable. We became really close friends in the weeks following the start of class, but I didn’t ask her out, mostly because I wanted to keep my options open. If I’m being honest, I kind of had my eye on another blonde hottie in our group. When that didn’t work out, I finally decided to give Renee a chance.

On our first date, I brought her to my family’s house to see a championship fight. (NOTE: Guys, never, EVER bring a first date to a family gathering; even if it’s something informal, she will always read into it as if you’re more interested than you actually are. Learn from my mistake- don’t do it!) After that was over, I took her to see a movie, and then we ended up back at her apartment, where we hooked up. It took pretty much everything I had to keep from sleeping with her that night, and she gave me the whole, “You’re seriously going to pass up sex with me?” vibe as I walked out the door.

Feeling guilty, I called her back when I got home and explained why I left her hanging. I said that I didn’t want to her to think that all I was interested in was a quick lay. I really did like her and wanted to see where things went. Which was probably my second mistake.

The next morning, I drove out to have breakfast with my best friend and his girl, and I was so excited to tell them about my date that I gushed about how terrific this girl was and how much I was looking forward to seeing her again.

Which is pretty much where it all went to shit.

By the time I got home, my brother had told me some girl had been calling the house all day looking to speak to me- fourteen calls in all. That should have been the opening red flag, but I didn’t pay it any real mind. I should have, though. The red flag slapped me in the face when I called Renee ten minutes later.

She was so excited to talk to me and asked where I was and whom I was doing it with. I boiled her line of questioning to excitement and nothing more. Next thing I knew, she had inundated me with every trivial detail of her day down to the time she brushed her teeth. I tuned her out for a bit until she said something that recaptured my attention- she had gone to see her parents out in Malibu and told them all about me. That didn’t bother me. After all, I had done the same with my friends earlier. But here’s the difference- in describing me to her folks, she referred to me as her ‘significant other’.

My first thought? “After one date?”

Then the relationship bile started to rise in my throat. I felt the invisible straitjacket start to tighten. See, here’s one thing I’ve realized about myself: I’m great at dating. Relationships, however? I suck at them. Well, back then, at any rate. If you even whispered the word, ‘commitment’ to me, I would run screaming out of the room faster than Pee-Wee Herman after a spicy Mexican dinner.

Still, I figured that Renee was excited about me, so I let it slide. Third mistake. The next day in class, she was all over me. It was like we’d gotten engaged overnight, only no one had bothered to tell me. She ran all over school telling anyone who would listen that she was finally in love with a great guy. In my head, I was like, “I certainly hope he’s bigger than me!”

One morning, my best friend Carlos had finally gotten tired of her gushing over me and said, “Dude, I don’t care how good you boned her, but you better stop! I don’t know how much more of this shit I can take!” When I explained that I hadn’t slept with her yet, Carlos shot back, “Then fuck her so she’ll shut the Hell up!” So I did. It only made the situation worse.

Next thing you know, Renee was calling me every chance she got. I couldn’t study, I couldn’t read, for God’s sake- I couldn’t even fire off a deuce without her calling and interrupting. It was annoying the ever-loving shit out of me.

Ugh. The week I spent recovering from an ear infection was like being on a weekend pass from Hell. Until…

Renee took it upon herself to help me recover, so she spent a Thursday night to hang out and baby me, which I absolutely hated. I mean, you try watching an episode of Seinfeld with some girl’s tongue down your throat and see how much you enjoy it. Okay, I know what you’re thinking- of course you’d continue playing tonsil hockey with a hot chick instead of watching TV. I would, too. But keep in mind that this was in the days before the show went into syndication and we had DVDs and Internet streaming. Sex could wait.

Little by little, I backed off from Renee, saying that I needed to concentrate on school and working for my Dad. She wasn’t happy about it, but she understood. A few weeks later, I took her to a concert where she was completely in my face the ENTIRE time. She nearly got into a fistfight with some girl who tried to flirt with me. By the time we came home, I’d finally had it and told her that we needed to take some time apart.

Needless to say, she didn’t take it too well. When I broke it off, she began following me everywhere I went. If I went to another class, she’d be out in front of it. If I studied in the library, she’d be sitting a few seats away within sight of me. She even followed me out into the parking lot when I left for the day. More than once, I considered running her over just to get her off my back. Oh, don’t let me forget to tell you that she would also be waiting for me when I came out of the damn bathroom!

I was beginning to fear for my life.

However, I lucked out- she ended up falling for some lanky dork in our acting class, and he became the center of her existence.

I really don’t know what it is with me, but it’s been my experience that when a girl falls for me, she falls HARD. And for the life of me, I can’t figure out why. It’s not like I’m Brad Pitt. To make matters worse, they never want to take things slow. They always want the big commitment. It doesn’t matter what I say, how I say it, or how many different ways I explain it- they never listen.

Sometimes I’m amazed I’m not gay. If this keeps up, who knows? Sheesh! 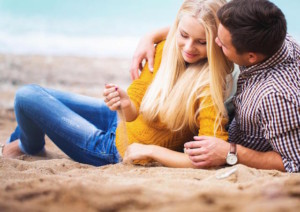 No One Should Be Made to Feel as If They’re Merely an Option
Treat me like a priority, not an option.