Over the years, I’ve come across as the sort of guy who knows what to say to women. My answer to that? Ahh….. how I wish that were true. As often as I’ve succeeded with women, I’ve probably been shot down twice over. In fact, my cheeks have probably been slapped more times than a stripper’s ass. Ok, maybe not, but it feels that way sometimes.

In the course of my lifetime, I have said a TON of stupid things, so much that I probably keep a running list of the top ten in my head. You want an example? How about the time I met Mariah Carey at a signing and blurted, “Wow! You look so much thinner on TV!” If you want to know what happened after that, I really couldn’t tell you. The last thing I remember is some big black dude with sunglasses standing on my neck just before I passed out.

You’d think that would be in the top five, but no.

Of all the dumbest things that have ever come out of my mouth, that honor goes to something I said to my ex-girlfriend, Kathee. Join me in the wayback machine, won’t you?

The year was 1994, and I was a twenty-three-year-old punk with black hair with a patch of silver who thought he knew it all and had a mouth to match. At the time, I was going to school at Oxford University. I was also deeply in love with my girlfriend, the aforementioned Kathee.

We had a good thing going up until she had broken up with me out of fear that I didn’t love her. Then I managed to win her back a few days after that, though I still harbored a little bit of resentment towards her. Or so I thought. As it turned out, I repressed a lot of resentment.

Anyway, our semester abroad class was winding down, and our professors were hosting a farewell party for the students and their host families to which we were obligated to attend. I could’ve bailed as my host family had no interest in going, but since Kathee’s was, I decided to tag along. My first mistake of the night.

Although I loved Kathee with all my heart, I still stung a bit from her breaking up with me. As we bussed from her house to the designated pub to meet everyone, I sort of seethed with a tiny bit of anger because she acted like nothing had ever happened. I wanted to talk it out, but never got the chance.

I was just about to bring it up when fate decided to mess with me in the form of a girl from our class named Christy.

See, at the beginning of the semester, I was already in a serious relationship with another girl named Erika, who dumped me two weeks after I arrived in Oxford. I met Kathee not too long after that. But for the brief period, I was single, I zeroed my sights on Christy.

God, you should have seen this girl- if I asked God to create my perfect woman out of thin air, she would have looked like Christy- Iong, walnut-brown hair, a smile you could spot from orbit, and a body so fine that you would sell your soul to the devil to touch it. It wasn’t until Kathee broke it off that I found out Christy had a crush on me. We had a chance meeting where she told me how she felt, but after we shared one passionate kiss, I realized that I loved Kathee more than the girl of my dreams, so I walked away.

Not being the type of guy who would keep secrets from his girlfriend, Kathee knew about my crush on Christy, though she didn’t know I had kissed her while we were broken up. So when Christy stepped on the bus, Kathee bristled like a cat in a dog pound filled with rabid pit bulls. As for me? I think I went so pale that I could’ve passed through the bus and boy, I wished I had.

Kathee was already fuming that Christy had sat across from us, and grew even more steamed when she sat closer to me. It didn’t help matters when I started talking to Christy and ignored her completely. I dunno what I was thinking. Oh yeah, that’s right- I wasn’t.

I guess a part of me was still angry with Kathee for hurting me, and I wanted to get even by flirting with someone I knew she was jealous of. By the same token, I didn’t think it was a big deal considering I wasn’t a cheater. Second mistake.

The longer Christy and I talked, the angrier Kathee got. It wasn’t hard to see she wanted to explode. That’s why Christy got off the bus a few stops early, saying she felt like walking the rest of the way. When I suggested we all walk together, Christy declined and jumped off the bus as though it were on fire. Judging by the look on Kathee’s face, it was about to be.

As the bus started lumbering forward once more, Kathee shot me the evil eye. Playing dumb, I said, “What?”

She snapped, “I can’t believe what an asshole you are!”

Innocently, I replied, “What’d I do?”

Kathee screamed, “I can’t believe you had the nerve to flirt with that bitch in front of me!” By this point, she was ready to rip my throat out.

Not knowing what else to do to calm the situation, I searched my mind and consulted my mental copy of THE MAN’S GUIDE TO LYING.

“No, I wasn’t flirting with another girl in front of you! It’s all in your mind!”

“I swear, I have no interest in Christy! “

Step 3: If all else fails, tell a bigger lie.

“I wasn’t flirting with her! I was just being friendly!”

None of which defused the situation. I suppose I could have bit the bullet and told the truth, but as every man in a relationship will tell you, when has the truth ever been helpful?

The bus arrived at our stop, and we both got out, Kathee still screaming bloody murder at me. Under normal circumstances, I could take it with a loving grin on my face, but since I was already agitated, I felt like my back was against the wall. I snapped, and I snapped back by saying the stupidest, most hurtful thing I have ever uttered.

For any guys reading this, take notes and underline the words, DON’T EVER DO THIS.

When Kathee egged me on to admit I was flirting with Christy, I’d finally hit my breaking point and shouted in front of God and everyone: “FINE! I WAS FLIRTING! WHAT THE HELL DO YOU EXPECT WHEN I’VE GOT THE GIRL OF MY DREAMS IN FRONT OF ME AND I’M SITTING NEXT TO THE GIRL I’M WITH?!”

Now if you’ve ever been morbidly curious to know what the look on someone’s face is as they’ve just been murdered, wonder no more. It would have been less cruel if I had shoved Kathee in the path of an oncoming taxicab.

We stood face to face for what felt like an eternity, and not in a good way. I should have apologized immediately, but I didn’t. The crowd around us was deathly silent. Instead of responding, Kathee simply turned and walked away.

I stood alone in the cold, surrounded by strangers who looked on at me in awkward silence. I couldn’t blame them.

One guy broke the silence and said, “That was bloody cold, ‘ey?”

Not knowing what else to say, I responded, “Who asked you, anyway?”

I suppose I should have gone home, shrouded in a cloak of shame and guilt, but I went to the party anyway. I tried to corner Kathee alone, but her friends played defense and kept us apart. A mutual friend of ours eventually walked up to me and read me the riot act, which I totally deserved.

By the time the party died out, Kathee and I were the last to leave. I asked if I could walk her to a cab. To my surprise, she said yes.

After we walked in silence for a bit, I said, “Kathee… I’m an IDIOT. I didn’t mean what I said. The truth is, Christy is the girl I always wanted…. Before I knew what I wanted. There’s only ever been one person whom I’ve ever loved enough to give my whole heart to, and that’s you.”

And with that, I was forgiven.

Fast forward to today- Kathee and I aren’t together anymore, though we remain the best of friends. Before you ask, no- she has never let me forget what I did that night. We laugh about it now.

You’re probably wondering what the point of that story was. Aside from the entertainment value, think of it as a cautionary tale. If there’s a moral to it, it’s this- Don’t let your anger get the best of you. Words can hurt more than a punch in the face.

But here’s the thing, people may get angry and lash out, you may say things you don’t mean, but if you’re truly remorseful, you can be forgiven.

If the person you hurt cares about you, if they know what’s truly in your heart, then they will listen. And if you’re truly lucky, they’ll give you another chance.

My suggestion? Don’t blow it. 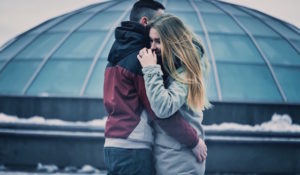