Since I spent the last couple of weeks baring my soul and making the ladies swoon, I thought I’d spend this week getting back to doing what I do best- making people laugh. That being said, I felt like digging through the old mental archives and wanted to share a story with you guys that took place while I was trapped in the figurative Hell otherwise known as marriage.

As I explained a while ago, weird things have a habit of happening to me, and this tale is a prime example of that. So strap on your seatbelts, and I’ll set the flux capacitor for the year 2005. Everybody ready to gun it up to eighty-eight miles an hour? Here we go!

The sun was slowly going down in the western sky above the lovely, small hamlet of Monrovia, just east of Pasadena. My wife, Kelly, and I decided to have diner at a quaint Italian eatery next to the theater where we planned to see FRANK MILLER’S SIN CITY after we were done eating. It would have been a lovely evening had it not been for the phone call Kelly received in the middle of our meal.

She snapped her flip phone closed and said, “Greg, we’re going to have to skip the movie.”

I suddenly got concerned. “What? Why? Who called?”

Kelly’s angelic face contorted with alarm. “That was Shalimar. She said she needs us. It’s an emergency.”

I blew out the breath I didn’t know I was holding. Our friend Shalimar was a notorious drama queen. Her idea of an emergency was calling us over to her mother’s condo to help her install a bunch of new shelves in her closet at ten p.m.

I was like, “Oh, God. What now? Did one of her cats drink from the toilet again? God forbid I have to spend ANOTHER three hours on the phone with poison control.”

Kelly’s face flushed to the point where it matched the red of her hair. “No…. this is a real medical emergency. Let’s go.”

I paid the check, and we walked at a hastened pace to our car. Finally, I said, “So what’s the big emergency?”

I unlocked the keys to our Camaro, and we both climbed inside. I started the car, backed out of our space, and peeled out onto the street, heading for South Pasadena.

I turned my head over to my wife while still keeping an eye on traffic. I said, “What’s the big deal? Is she having a panic attack or something?”

Kelly crossed her arms. “I don’t want to say.”

“Is she having a stroke?”

“Greg, she doesn’t want me to tell you!”

“Oh, for Christ’s sake, Kelly- what is the big deal? Does it involve KY and a hamster?”

“Don’t be stupid!” She was fuming.

“Then what’s the big deal?”

“I’ll tell you when we get to her house!”

I rolled my eyes. “Fine, whatever!”

We pulled up to Shalimar’s condo. When she answered the door, Shalimar was all pale and sweaty, wrapped up in her bathrobe. The jokes and my annoyance towards Shal melted away and were replaced with concern for my friend.

Shalimar said, “I’m… Do you mind if I talk to Kelly alone real quick, Greg?”

Getting more worried by the second, I replied, “I guess. Is there some reason you don’t want to tell me what’s wrong, kiddo?”

I shrugged. “Whatever, I guess.”

Shalimar guided Kelly to her bedroom and locked the door. I flopped down in a chair where I was immediately jumped by five cats. As they shed fur and dander all over me, I muttered to nobody in particular, “Great.”

Twenty minutes later, Kelly came out of Shalimar’s bedroom looking like she’d just autopsied an alien. “What the Hell were you guys doing in there?”

“We have a serious problem, here.”

I was getting real tired of being kept in the dark. “Will you just tell me what the Hell is going on?”

Kelly, her face dire, stared daggers at me. “Before I do, you better not laugh.”

“Shalimar got something stuck inside her.”

My concern faded and I shifted back into joke mode. “It really was the hamster, wasn’t it?” I tried hard not to laugh.

“She has something stuck in her who-ha.”

Confused, I shot back, “Her who-what?”

Kelly gave me a dirty look. “Her you-know-what.”

“Are you REALLY going to make me say it?”

“It depends on how long I can keep this going.” I chuckled.

After pussyfooting around for another ten minutes, Kelly finally explained that Shalimar had a tampon lodged in her vagina. And not the padded kind, either; one of the old fashioned ones in the plastic tube that you inserted a wad of cotton inside and left a string that you could use to pull it out. Only the string broke.

Then Kelly explained what she was doing with Shalimar in the twenty minutes I waited in the living room. She was digging for it. Aside from trying not to collapse in a fit of giggles, I was also trying to keep myself from barfing, especially when I heard what they wanted me to do next.

They both looked at me like I was Forrest Gump’s stupider cousin.

Kelly said, “You have longer fingers.”

I could not believe my ears. “Let me see if I’ve got this straight- When Shalimar got a boob job and offered to show them off and let me cop a feel, you had a problem with that, but now it’s okay for me to dig around inside her? Get outta town!”

Shalimar begged, “Greg, please. I’ve had this in me for over twenty-four hours now. I’m getting scared!”

Trying to sound sympathetic, I said, “Shalimar, I can’t do it. Even if I did, I don’t think I could ever look you in the eye again. I think we should take you to urgent care.”

Without a second’s hesitation, my mouth blabbed, “Well, it’s either that, or we call a lesbian and tell her to bring a snorkel!”

Sighing, I kneeled down on one knee next to Shalimar, who was lying on her bed. I took her hands in mine. I said, “Listen, Sweetie… I know this is going to be hard, but there’s not really anything else we can do. If I were to dig around down there blind, I may end up doing more damage. We need to get you to a medical professional. Don’t worry, Kelly and I will go with you, and she’ll even be in the exam room with you. It’s not that big of a deal.”

“Of course. Now get dressed and we’ll get it over with.”

An hour later, we waited in the lounge of the local urgent care. Shalimar was a little freaked out, but I held onto her while Kelly filled out her paper work.

“What do you think they’re going to do to me? Cut me open?” Shal asked.

I chuckled. “I doubt it. They’ll probably just numb your cervix, spread you open, and use a pair of salad spoons to pull the cotton out. No biggie.”

“Well, I’m no gynecologist, but I think that’s the procedure.”

Two hours later, Shalimar and Kelly walked out of the exam rooms, the both of them looking extremely relieved. “So how did it go?” I asked.

Shalimar said, “They used the salad spoons, like you said.”

I laughed. Then I said, “Anybody for ice cream?”

I never did get to see SIN CITY. Dammit. 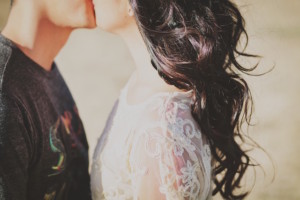 Do I Have To Say the Words?
But just once, I would like to.