Being that this is my 50th article for ACW (Anne Cohen Writes), I was kind of at a loss for what to write about. Something funny? Life-affirming? Romantic? Spiritual? My personal preference at this point would be to air out my feelings, but I’ve done enough of that, so we’ll stick to something funny.

In the course of my 47 years, I’ve gone on plenty of first dates. Probably more than the average single person, mostly due to the fact that I was searching for something I desperately wanted. If I didn’t find it, I was out the door so fast, I left behind a vapor trail.

After a while, it kind of became routine- I knew how to dress, where to go, what to say, and how to act. It got to the point where it felt like an endless job interview. In a way, I’m almost grateful to be recovering from a stroke, because I don’t really have to think about that crap anymore.

Having said that, this, oddly enough, is not a story about me. Don’t get me wrong, I’ve had plenty of lousy first dates, but they all pretty much stemmed from lack of interest on my part. No, this is a story about a friend of mine.

One sunny afternoon a few years back, I was at home, bored and alone. I felt like getting out of the house, so I grabbed the HELLBLAZER graphic novel I was reading and headed out to the local coffeehouse, the Daily Brew.

I suppose I could have gone to Starbucks, but they’re always so crowded and loud. Besides, they’re not very conducive to reading. Everyone there has their face glued to a laptop, eyes furrowed like they’re conducting research into quantum mechanics.

At any rate, I walked into the Daily Brew wanting nothing more than a latte and a danish while I enjoyed reading the adventures of John Constantine, con man, scoundrel, and scourge of demon-kind. However, as soon as I walked in. I saw my friend Jimmy sitting at a table, with a girl, no less.

You’re probably wondering why I found this so weird. For one, my friend Jimmy didn’t live anywhere near me. I usually ran into him at the comic book store I frequented in Pasadena, Comics Factory, where he worked. It’s always weird running into someone you know other than where you know them from. Kinda like when you run into someone you went to high school with.

Secondly, I was weirded out to see him with a girl in that he’s a geek like me. Not that I thought he wasn’t straight, just more or less asexual because he never talked about girls.

I didn’t want to interrupt his date, so I ordered my coffee and did my best to stay out of his line of sight. I guess I didn’t too good a job at being incognito because he greeted me and asked me what I was doing there. I said hello, socialized for a bit, and politely excused myself, saying I didn’t want to intrude.

I took a seat on the other side of the room so I could relax and read. But the harder I tried to concentrate, the more my attention kept drifting to Jimmy and his date. I guess my wingman’s instincts kicked in. Besides, I wanted to see how he handled himself.

To describe Jimmy, he sorta looks like the lovechild of Ritchie Cunningham and Ichabod Crane, only with glasses and a wild mane of red hair. He wore a wrinkled pink T-shirt and jeans. Not what I would have worn on a first date, but then, I wasn’t the one on a date.

In my head, I was analyzing the play by play going on between Jimmy and his date, kinda like a sports commentator calling a football game. I felt a little bit like Howard Cosell, all I was missing was a pair of headphones, a microphone, and one of those weenie yellow sports jackets with the ABC logo on the coat pocket.

Everything seemed to be going well… at first. Jimmy’s date was smiling and doing the majority of the talking, as women are wont to do on a first date. (Sidebar- Guys, a tip, let the girl do most of the talking. It makes her think you’re a good listener. ) But as I watched, Jimmy started letting his eyes drift away, which meant that whatever she was blathering was boring the shit out of him. Thing is, you can’t do that. It tells a girl you’re not really interested in what she has to say.

Take it from a former player, what you need to do when faced with a yapper is focus on the tiny space in between her eyebrows and just above the bridge of her nose. It maintains the illusion that she has your full attention. Meanwhile, you can tune her out while you plan out the rest of your week, or you can replay your favorite movie scenes in your mind.

It got even worse when Jimmy’s hand drifted to his left pants pocket, where he dug his phone out and laid it on the table. That was bad enough, but then his fingers hovered over the screen as his girl kept talking.

When Jimmy’s phone activated and he started scrolling through it, I couldn’t help letting out a huge groan. They looked over in my direction, and I mumbled, “Sorry. Too much lactose in that latte!”

It wasn’t too much later as the girl excused herself to go to the bathroom. I couldn’t exactly blame her for that. I wasn’t even on that date, and I wanted to shove my head in the toilet in embarrassment. Getting up from the table, Jimmy sauntered over to me and we started bullshitting about comics and whatnot. I debated about whether or not to admonish him about his behavior, but I figured it wasn’t my place, so I didn’t.

Twenty minutes passed since his date had gone to the bathroom, which was a bad sign. See, girls don’t use the bathroom for that long without a friend. We’re talking ten minutes, tops. I guarantee you, if a woman is alone in a bathroom longer than that while on a date, it means she’s either crying or on the phone to a girlfriend or maybe even a booty call.

When she finally did come back, Jimmy kept talking to me instead of going back. I kept nodding my head to let him know, but he didn’t move. I broke down and told him, “Hey, man- your date’s waiting for you, and you shouldn’t keep a lady waiting. I’ll catch you tomorrow.”

And with that, he went over to their table, and they left soon after. When I saw Jimmy the next day, I asked him how it went.

He said, “Okay, I guess. We had something to eat, and then she said it was nice to meet me and that she’d give me a call.”

I blew out a sigh and laughed. “Dude… you are never gonna see that chick again in this life!”

He shot back, “What makes you say that?”

I said, “When a girl says, ‘It was nice to meet you,’ it’s the kiss of death. She’s not going to call. I’ll bet you a hundred bucks she doesn’t.”

And she didn’t. Too bad Jimmy never took me up on that bet. I would have been a hundred bucks richer.

Now, you may think that Jimmy is a creep and deserved what he got, but he really is a nice guy, just kind of hapless where women are concerned. Or he was.

This story has a happy ending. A few months later, he met a girl named Julissa that he fell madly in love with. They dated, eventually moved in together, and just recently got married.

If you’re wondering if he learned his lesson, yeah, I’d say he did. He dotes on Julissa and loves her very much.

As the saying goes, ‘And they lived happily ever after….”

One thought on “The Worst First Date Ever” 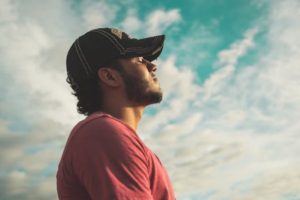 Are You Stressing Out? 4 Things You Can Do When Nothing Seems to Help
Some great ways to relax when you need it the…