Ladies, believe it or not- guys hate getting into fights with you. As friends, boyfriends, and husbands, we absolutely hate it, and I’ll tell you why: BECA– USE THERE’S NO POINT TO IT. Men have a need to make sense, and women have a need to be right. It doesn’t matter if they’re completely off the reservation wrong- a woman could outlast the damn Energizer Bunny in order to make you see it her way.

If women think they can win an argument based solely on the fact that they can outlast their significant other, it’s for one reason only- we let you. As men, we know the battle is already lost because you won’t shut the Hell up about it. I’m sorry if that sounded rude, but it’s the plain truth.

My brother once made a very astute observation. He said, “Women are illogical creatures.” And for a long time, I agreed with him. I’ve had plenty relationships with women, both as friends and lovers, and whenever I’ve had a dispute with them, it always ends the same way- with me eating crow and begging for forgiveness. I hate it. It makes me feel like a doormat.

If there’s one thing I’ve realized in the last few years, it’s that my brother was wrong. Women are FAR from illogical. They just use a different kind of logic- circular logic. They will make their original point and keep circling back to it to reinforce their argument, thinking that after awhile, a guy will break down and finally admit that she was right all along. Which we do, not because we realize our mistake; we just get tired of listening to you.

The problem with men is that we have a tendency to use a straight line of logic; meaning that we’ve already made our main point, but we back that up by using a linear sequence of events and examples to shore up our argument.

For example- let’s just say a girl gets into a car accident because she was texting while driving and tells her boyfriend about it. The boyfriend gets pissed off and tells her that it’s her own fault because she wasn’t paying attention to what she was doing. Knowing she was wrong but not wanting to admit it, she blames the car in front of her for stopping short on a yellow light. The guy will make his main point and go on to list the dangers of driving while texting and may even go so far as to quote the statistics of people dying from those kinds of incidents. Then her counter argument will be that she’s always been a good driver, name all the accidents she could have gotten involved in but didn’t, and circle back around to the guy in front of her and blaming him for stopping short in the first place.

No matter how wrong she may be, she’s going to go back and keep hammering her point that the car accident was just an isolated incident. And no matter what the boyfriend says to convince her otherwise, she will NEVER admit to being wrong. You’d have an easier time getting a semen sample from a bucking horse hopped up on crystal meth.

So to keep things simple, I’m going to pass on a piece of advice to you fellas out there that my father passed on to me. Burn it onto your brain, use it wisely, and pass it on to your sons, and have them pass it on to their sons, and I guarantee you- the world will become a peaceful paradise.

“Son, never argue with a woman- whatever she wants, JUST GIVE IT TO HER. Hug her and say, ‘It’s okay, Hon.’ If it still bothers you after that, then have as many beers as it takes for you to stop giving a shit about it. That’s the key to happiness!”

You have to admit, it’s great advice. Let me tell you- when my father died, the world certainly lost a fountain of wisdom. 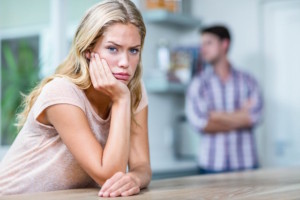 When You Want Different Things
The moment when you should believe what someone says.