It is hard to believe all that mankind was able to construct in the ancient world. In fact, some of these accomplishments have been deemed so grand, so costly, so mysterious, and so amazing to behold that we collectively refer to them as “Wonders of the Ancient World.” Many of those Wonders are gone, existing now as a mere reference in the records of ancient historians. But for those that still exist, such as the Great Pyramid of Giza or Stonehenge, there is only one widely agreed upon theory that accounts for their creation: it had to be aliens.

Jokes aside, why are “aliens” the go-to explanation for any phenomena of construction? The likeliest answer would be because we in the modern era appreciate the role technology plays in construction and can’t conceive of the sheer manpower and hours spent completing projects that astound us today. Surely if we, who created the Burj Khalifa in Dubai or the Statue of Unity in India, are amazed at the ingenuity of the ancient Wonders then a technologically advanced race must have been in charge. After all, how could they coordinate the build effort from the quarry to the construction site without the benefit of remote communication?

Technology To Match Our Ambition

Time has always been difficult for us to measure because our lives are so short, relative to the age of the earth or man’s existence on it. For instance, we in the 21st Century are closer now to Cleopatra than she ever was to the creation of the pyramids. Likewise, Orville Wright, the co-inventor of the airplane along with his brother Wilbur, was alive to see his invention drop bombs in World War II. How do we account for these two examples of relative time? How could Cleopatra live in a world that remained virtually unchanged for millennia, while one of the Wright brothers﹘born in 1871﹘witnessed gargantuan advancements in medicine, communication, and war-making?

The Answer: technology. Curious people with a hunger to improve society ask crucial questions, and make life-changing inventions. This then inspires others to expand their perception of what is possible, who then go and innovate on those technologies. In this way does the flywheel of progress start moving.

A Note on the Flywheel

A flywheel is a large, heavy wheel that can store its kinetic energy into self-perpetuating motion once rolling. It may take a lot of force and energy to get the big wheel spinning, but once it does, the physics at play in its construction can keep the flywheel turning indefinitely until a sufficiently large amount of inertia slows it down. A flywheel can be found in various machines from as far back as the Stone Age, including:

Construction for the 21st Century

The technology of construction is changing rapidly each year, so much so that the tools we find commonplace today would be akin to magic even 100 years ago. Thanks to computers, we no longer have to use our imaginations while looking at a set of blueprints, for instance﹘we can take a virtual tour of the site, walking through the floorplan or visualizing all the siding options for our exterior remodel.

Innovation in construction technology (also known as ConTech in the industry) has allowed contractors to increase productivity, ensure safety, promote environmentally-conscious building practices, and shorten the time it takes to see a project through to completion. Such advancements include:

Technology is an incredible tool that creates a self-perpetuating mode of advancement across all sectors of construction. As time goes on, we will only see these innovations happen faster and faster, and with greater effect. Who needs aliens after all? 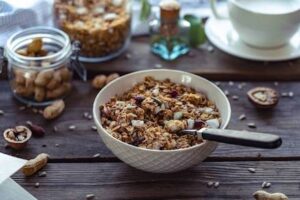 Muesli as a Breakfast Option
Muesli is a healthy and nutrient-rich breakfast. It is good…