They say that any addiction is bad. And they also say that any time that someone is obsessed, that it’s a really bad thing. I’m sure that many people will have different takes on this article, but I just wanted to get a few thoughts across from my own perspective and how I see things when it comes to being insanely obsessed with your partner.

First of all, when someone says that they’re obsessed with someone, usually that obsession in their eyes is more so a feeling of intense love towards that person. Which brings the question as to whether or not obsession and love are the same thing. Just because someone is obsessed with someone, it doesn’t necessarily mean that they’re in love with them.

True love is something that’s more of an agape type of thing, which involves being selfless, putting your partner’s needs above your own, and wanting what’s best for your partner, even if it involves not being with you. This is where obsession differs from love the most I would think. You see, when a person is crazily obsessed with someone, they usually put their own needs first. And especially, when it comes to the remote idea of putting up with anyone else being with their partner, if it’s not them.

There’s a good and bad side to being addicted or obsessed with being with someone. But not just being with a person, but loving them as well. When someone is addicted to you, they want to hear your voice, spend time with you, and connect with you throughout each day. Which is actually very similar to when you’re in love with someone. But when you’re addicted to someone, many times you’ll drive yourself crazy by overthinking things, assuming the worst, and drawing up conclusions as to what’s going on with your partner at any second that they’re not with you.

Depending on how much love and attention that you desire to have in a partner, you might actually like the feeling of your partner being addicted or crazily obsessed with you. But even if you’re the type of person who likes a lot of attention in a relationship, and truly loves the fact that their partner is so obsessed with them, there’s usually a downfall and another side to that intense and amazing feeling.

Some of the problems that go along with getting all of that love and attention from someone who’s obsessed with you are things that you might not be so thrilled about. That is, assuming that you’re thrilled about all of their constant love and attention to begin with. One of those things is the fact that your partner will likely be jealous, and many times overly jealous to the point where you will feel that you can’t even breathe. Many times, when someone is obsessed with you, they will not only want to consume all of your free time, but they might even be jealous of your friends, and even if they’re of the same gender. And the reason is usually because those people are getting some of your attention, when they want it.

Another thing that might happen when someone is obsessed with you, is that you’ll lose your sense of freedom to some degree. They might be controlling, desiring to spend all of your and their free time together, and wanting to know where you are, and what you’re doing throughout each day. This can become very unhealthy, despite the fact that you may love all of the attention that your obsessed partner may give you. Even if you’re the type of person who likes a lot of attention and to have a partner who’s madly in love with you, everyone still needs a sense of freedom and space, even if it’s merely occasionally.

Many times, being without a person can be healthy, even if it’s like I said, on occasion. When someone is obsessed with you, they’re likely not going to be good with dealing with space and distance very much. It might make them paranoid, overly jealous, or even turn in their sheets at night, because they’ll usually tend to think the worst, instead of trusting you and giving you the benefit of the doubt. You see, the more that someone is obsessed with you, the more trust issues that they’ll usually have, and the more that they’ll fear losing you, even if you have no intention of leaving them.

Unless you’ve personally experienced a relationship where someone was totally addicted to you in every way, in your natural state, and absolutely loved and adored all of your idiosyncrasies, and things that you might’ve viewed as imperfections, it’s really hard to judge someone who chooses to be with someone of the sort.  And many times, they’ll tell you firsthand just how amazing things can be, and they’ll probably feel that all of the positives that go along with being in a relationship when someone is addicted to you is well worth it.

Some people desire to have a simple life, and would settle for being in a healthy relationship even if it lacks an insane amount of passion. But some people prefer the roller coaster ride, and they’re willing to work really hard on improving their relationship, even though it can be extremely challenging when one or both people are obsessed with each other.

At the end of the day, this is a personal preference on whether or not you choose to be with someone who’s obsessed with you, vice versa, or even whether you’re equally obsessed with one another. But the more obsessed and addicted you are to each other, the more challenging that your relationship will likely be, and the more that you’re going to have to work on yourselves as individuals, as well as on improving your relationship.

The best advice that I could give to couples who are obsessed with each other or perhaps when one person is obsessed with the other, but when they totally dig it, is to remember that when anything in life is really great, it takes hard work to maintain it, and to keep it great. No one is perfect, but if you’re desiring to have someone who will love you in a way in which you feel that they’re completely addicted to you, which might feel perfect, you have to be prepared for the package that it usually comes with. Their love for you may feel perfect, but prepare yourself what comes with that type of supposed perfect love and attention.

Don’t stalk each other in any way, and now with social media thriving in this day and age, have a little self-control to check up on one another. Work  on building your trust so that your amazing love will stand a real chance at lasting happiness, and for the long run. As well, when you don’t hear from each other for a certain period throughout the day, have a little faith, and give that space to each other to breathe, to reflect, and to absorb their feelings, as well as the time to take care of their other priorities. It’s one thing to be obsessed with one another, but just remember to be a good partner, a best friend, and to keep a certain amount of balance in your lives. Remember, the goal is to be happy together, and in your case, happily obsessed.

So as far as I’m concerned, if someone is O.K. with the fact that their partner is addicted to them, then by all means, be with that person, consume yourself with them, work on your relationship, and thrive together. Having said that, you should definitely have a conversation with one another about how you love and embrace your relationship together, but also how you need to set up certain boundaries, be trusting of each other, give one another the benefit of the doubt, a little space at times, and remember just how important it is to maintain a calm and loving relationship, and how that should be your main goal together.

Being with someone who’s addicted to you can be great, and incredible even. But just because you’re with someone who might be this type of person, doesn’t mean that you have to put up with them being overly jealous or untrusting of you. These are issues that your partner is going to have to work hard on improving, so if they’re not open to improving themselves, then they’re not doing their part in the relationship, and then neither one of you will be happy, despite the intense love that you might share. Both people need to actively work on improving themselves and their relationship for always. And the more passion, addiction, and obsession that you have with one another, the more work you’re going to have to put into the relationship. 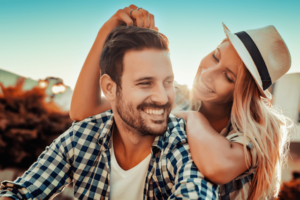