There are many ways to win the love, attention, and affection of another person. But, some of those ways aren’t the best methods for success. Some of the methods that people use in order to attain the love, attention, and affection of someone else can be truly negative, toxic, and dishonest. Many times people manipulate situations, play mind games, or lie to people in different ways in order to get what they want. A lot of people will have ulterior motives when it comes to winning the love and affection of another.

I always write about the importance of being honest, being a good person, and how you should avoid hurting others in every way possible. We can all strive to be better people and make this world a much better place, if we do our own part by working on ourselves, being kind, and when it comes to relationships, being honest, open book, and having pure intentions. There are two basic categories that people use in order to win someone’s love. Within each category, there are many methods that people will use to win your love. The following are the two categories, and some of what’s included in them.

In the dishonest approach, people will lie, cheat, manipulate, and have ulterior motives. They’ll stop at nothing to win your trust, including playing mind games, playing with your feelings, or even viewing winning your love as a means to winning “the game.” They’ll tell you what you want to hear, and stop at nothing until you believe them. They’ll do whatever it takes to convince you that their intentions are pure and honest, despite that they’re not. Having said that, some people won’t even bother with putting that much effort into making you believe them, if they have too many other “options.” They’ll put their feelings before yours, put little to no effort into seeing you, making time for you, or making you feel special. They’ll treat you as an option, instead of a priority.

In the dishonest approach, the goal is to attain your love, your body, and the belief that their intentions are pure. They’ll do as little as possible, and put the least amount of effort into things, unless it will be things that they’re able to use as tools in order to win their goal, which is you. They might put effort into things early on, but that effort, those gifts, and that attention that you might tend to receive early on from them won’t last. It especially won’t last if you buy into their nonsense too quickly, fall in love with them, believe them, or sleep with them too early on.

In the honest approach, things are done the right way, and with pure intentions. Whether someone is the right person for you, and your best possible match is irrelevant in this matter. We’re specifically looking at some ways in which people will try to win your love, attention, and affection. In the honest approach, people will be honest, direct, and have the motive of developing something sincere and genuine with you that could lead to a healthy and happy relationship.

In this approach, people tend to be honest and open book. If they do sweet things for you or put effort into things, and into seeing you, they’re doing so out of a pure and innocent place. They’ll see you, because they want to see you and get to know you better. They’ll make time for you, without making excuses, and put effort into things so that you’ll feel that they’re interested. If they decide to spoil you, pamper you, or even buy you gifts, it’s because they want to impress you, or woo you so to speak. Their intention isn’t to sleep with you, or use you for their own selfish reasons. But instead, their goal is to see if you’re the best possible match for one another.

You Can Get More with Honey, Than Vinegar If you truly want to win the love, attention, and affection of another, it’s important to use the honest approach, and to do things in the right manner. We should all be as righteous and decent to others as we possibly can. We should all have good and pure intentions when hoping to find our match. If you want to win the love of someone else, try being kind and putting more effort into things. The way that we talk to others is one of the biggest ways to show someone how much we care. Especially, if it’s early in the dating period. There should be a healthy balance between our words and our actions.

As far as intimacy, I believe that people should be intimate when they’re both equally ready, once they’re exclusive, and in love. Empty love, empty words, and empty intimacy are nothing more than a big pile of emptiness that will lead nowhere except for a momentary feeling of bliss, which is nothing more than quick, immediate, and instant gratification. It’s important to build a healthy foundation with another person before becoming intimate. When it comes to what we say to others, it’s imperative to remember that kindness and being sweet are the best tools that we can use when getting to know someone. You can get much more with honey, than with vinegar. In other words, think before you speak, and when you choose to speak, be kind and sweet. Healthy relationships take time, effort, and going about things with an honest approach. 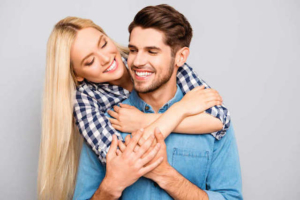