Many times, people jump to conclusions before they really know what’s going on in a situation. And obviously jumping to conclusions isn’t the best method for getting accuracy or the truth. However, when you’re dealing with someone who has a track record of hiding things, being dishonest, or keeping you in the dark, it’s much more understandable why you might be suspicious or even jump to conclusions when you hear part of a story.

It’s important to give your partner the benefit of the doubt before jumping to conclusions a thinking or assuming the worst. That’s why it’s imperative for couples to work really hard towards building trust in their relationship from the very get-go. You see, once the trust is gone in a relationship, it will be as if they’re missing that very big and fundamental foundation pillar of what it takes to have a healthy and happy relationship. So make sure that you always work on building trust, but even more so, when you’ve lost trust or when your partner has a track record of being dishonest.

One of the worst things that couples can do in new relationships is lie, and provide nothing more than a closed book type of approach. In a closed book approach, they’ll only disclose certain information, leaving out things that they might feel would make you think twice about being with them. Keeping people in the dark, only disclosing some information, as well as hiding things, are just a few of the different forms of lying that couples do. Lying is lying at the end of the day, so if you want an honest relationship, it’s important to build trust by being honest yourself, and hopefully your partner will reciprocate that honesty by the example that you’ve set.

It’s imperative that couples strive towards being an open book in their relationship, so that not only they’ll share honesty with one another, but also so that they’ll build the foundation of trust. When couples are able to truly trust one another, they’ll be much more likely to be each other’s best friend and someone who they can turn to in times of need or simply to share things with on a regular basis. But when couples tend to hold back from telling their partner certain things, they’re basically saying that they’re untrusting of their partner to some extent, and that they definitely don’t view their partner as a best friend or one that they’re choosing to confide in.

Things should always go both ways in a healthy relationship and never be one-sided. So if you’re the type of person who’s open book and honest, you should be with someone who’s just like you in those ways. When one person in a relationship is open book and honest, while the other person keeps them in the dark or tends to lie more often than not, that couple will never be happy and they’ll never be able to trust each other.

When you’re in a relationship with someone and you have trust issues from things that you’ve surpassed with one another, there are ways that the broken can be rebuilt. However, the biggest way to rebuild trust is by being a completely open book with one another. Not by being paranoid or untrusting, but more so, by openly and equally sharing things with one another, and by allowing or even better, welcoming any questions that your partner might have at times. So for any couples out there, if you fit into this type of scenario where trust has been lost by one or both of you lying or keeping certain things private for the other for whatever reason, rebuild your trust so that your relationship will once again thrive and be healthy. be each other’s best friend by maintaining an honest and open book type of approach.

Remember, you get what you give in relationships. So if you want to have a certain type of foundation in your relationship that’s built on honesty and trust, you need to be willing to do your share of things by being honest and trustworthy yourself. And last but not least, if you’re in a relationship with someone who is trustworthy, and who hasn’t previously let you down, whenever you have doubts, concerns, or questions about your partner’s actions or intentions on anything, it’s important to be able to comfortably communicate your feelings to them, instead of assuming the worst, jumping the gun, and jumping to conclusions.

3 thoughts on “When Couples Jump to Conclusions, and Assume the Worst”

Read All About It! 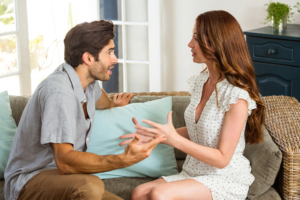 Five Ways To Know You’re A Doormat
Why settle for being with someone who treats you poorly.