There are a lot of people who don’t like to reflect on their childhood, mostly due to some awkward Junior High memories, but I’ve found that it is one of the most important things you can do to ensure your marriage has a good chance at success. Here is why:

Many of us grew up watching Disney movies, the ones where people lived happily ever after and you watched the couple ride off in a horse drawn carriage to their honeymoon. And you thought, that’s how love is.

But then, you were snapped back to reality by your parents fighting and throwing things at each other, perhaps for the third time that week, or maybe even that day. They might have constantly thrown out the word divorce as a way to hurt each other, but then days later told each other they loved each other. Add on to the fact that at least a few of your friend’s parents probably got a divorce and you end up growing up knowing nothing but instability.

With that level of dysfunction going on at home, and the picture of perfection and lack of dysfunction in the movies, a child’s mind really has three choices: one is to believe that their parents aren’t really in love, another is to believe that there are shades of being in love (maybe mom and dad loved each other at one time, but don’t as much now), and the third possibility is that love simply doesn’t exist. In any of these cases, what the child secretly hopes for is for their own future to have the fairytale ending that they saw in the movie.

These kinds of situations in childhood can set a person up for failure when it comes to relationships. They grow up, fall in and out of love (or co-dependency), often due to self-sabotage, subconsciously not wanting to get married or have a stable relationship because all they saw in marriage was fighting and discord, and a distinct lack of acting in love.

If they do manage to beat back their own fears about marriage long enough to get married, they still might carry in baggage from their parent’s marriage. They’ll inadvertently look for ways their spouse is acting like one of their parents, especially during fights, and then panic when they notice it because they believe they’ve made the mistake of trapping themselves in marriage the same way their parents did, repeating the dysfunctional cycle.

I’ve seen this so often with people in my generation, which truly breaks my heart. I don’t believe it has to be this way. Here are some pieces of advice I have for individuals or couples that found themselves in circumstances like this in childhood that are worried about it affecting their relationships.

1. Talk About Your Parent’s Marriages

Discuss your parent’s marriages (or the marriages of people that impacted you as a child) with each other. Ask each other what they got right and what they got wrong. Talk about how they fought and how it made you feel. Form a plan of action based on how you would like to improve on what you saw as a child.

Counselors aren’t just for people who are in critical condition with their mental health. They are great resources for people from all walks of life to help evaluate and improve your emotional health and the health of your relationships. I highly recommend premarital counseling and marriage counseling every once in awhile. Just make sure to find a good one, don’t settle for the first counselor you find just because they are convenient, find one that fits you and your partner well.

3. Lay Out Your Fears and Insecurities

Even if your parents had a perfect marriage, you might still have insecurities and fears rooted in childhood memories that impact your relationship. You might think you are not good enough (or thin enough, or smart enough…) for the person you are with and that might be driving you to push your spouse away without even thinking about it. Mental scripts like that, especially learned in childhood, are powerful and often go unrecognized. They can make a lovable, wonderful person believe they are the hardest person in the world to love or that they don’t deserve love.

Lay these thoughts out on a piece of paper and have your spouse do the same, then give them to each other. Vow not to let these toxic scripts get in between the two of you and work on a plan to banish them from your life.

4. Recognize the Truth is In Between

Whether or not your parent’s marriage was abusive or dysfunctional, you probably saw some things that weren’t the glamorous version of love Disney would have you believe. Recognize that love, while it is wonderful, is also messy. Disney doesn’t show life after happily ever after because sometimes it can get a little stressful (and they probably wouldn’t sell as many movies showing that).

There are obligations and chores and job stress and children and all sorts of things that come along after the wedding that you don’t see in the movies but are a part of every single person’s marriage in real life. These things don’t make love any less of a blessing or bond, but they do make people tired and less charitable towards each other sometimes. The beauty of love is that, when it is real, it always trusts, always hopes, always perseveres (1 Corinthians 13), no matter what life throws at it.

One thought on “Why You Should Evaluate Your Childhood, For The Sake Of Your Marriage” 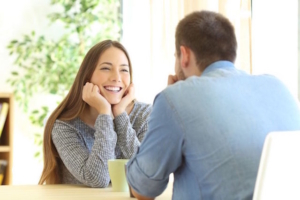 The One Thing You Must Be Willing to Do on a First Date
Be willing to risk getting hurt.