So you found that special someone, and you’ve been in a relationship for quite some time now. What’s good about your relationship is the fact that it’s based on a solid strong foundation built of what’s really important. Those important pillars are everything from having great communication, honesty, trust, and it doesn’t hurt that your partner is your best friend. The only problem is that you recently found out that throughout your whole relationship your partner has been on dating websites, swiping here, liking there, favoriting here, and emailing here and there with other people of the opposite sex. You feel betrayed, and as if everything that you’ve built and worked so hard in developing throughout your relationship was a bunch of bologna, and now you’ve lost trust with your partner. This is a very tough predicament for both people in the relationship. Despite whether or not the person was dating others, or simply communicating with others online was actually cheating, being unfaithful, or even if they were simply wanting a way to feel more confident about themselves, it doesn’t matter. Once your partner finds out that you were untruthful to them, your reasons (or theirs) likely won’t matter. The fact of the matter is that the reason is irrelevant. The reasons could be one of many things, but all that really matters is that they’re excuses.

When someone is in an exclusive relationship, it goes without saying that being in an online dating website or app is wrong, and inappropriate. There’s no good reason or excuse why someone should be looking, swiping, or even chatting with someone else online. You’re supposed to be an open book, honest, and trustworthy to your partner. Having a dating site profile online and being active on it is beyond inappropriate and definitely a form of emotional cheating.

Honesty is everything. If you need a confidence booster, then there are many other ways to go about it. If you’re keeping your options open behind your partner’s back, then that’s just plain old shady and messed up. As well, if you think that it’s okay to have a dating site profile active without your partner knowing it, it’s so messed up, and definitely a cause for rethinking your relationship altogether. There’s no good excuse to have a profile on a dating website, and not even if you’re thinking that it’s a good way to meet people or make friends. It’s incredibly selfish to think that “wanting to be social and meet people” would even be a reason. As a couple, and definitely, as a couple that has intentions for the long term (including building a life and family together one day), it’s important, to be honest, and an open book.

I personally experienced something as such a while back, and I can honestly tell you that it was truly painful for me to think (or assume) that we were in an exclusive relationship, being that my partner at the time was on dating websites throughout the whole relationship. I never even saw it coming. I’ve definitely learned from that experience myself, and I’m hoping to spread the word and to let others know that no, it’s not okay, and you shouldn’t put up with it if you find out that your partner is doing this behind your back. The truth is, when you’re with someone in a relationship, you shouldn’t have to snoop or spy on the person, or even be suspicious of them whatsoever.

You should definitely go into each and every new situation with a blank, clean slate, an open heart, and without bringing any baggage from previous relationships. You should think of your partner as your best friend, be trusting of them, and build your trust within the relationship by setting an example of being honest yourself.

It’s okay if you get let down. But just remember, “the right person” will never go behind your back or look for someone else while dating you. As well,  they’ll never have to try and convince you that what they’re doing is harmless, being that they’ve never met or slept with anyone else but you, despite being on dating sites. The right person for you will be your best possible match, honour you, respect you, appreciate you, and they’ll do anything and everything to make you feel their love by their words and their actions. 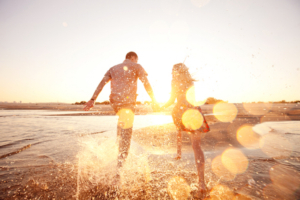 Creating Happiness in Yourself and in Others
Put some extra effort into being a nicer person.