I can just imagine upon posting this article the herds of men and women angrily leaving comments disagreeing with me tremendously. I’ve heard it all before. I must be crazy or delusional to think that in this day and age, being that it’s 2016, and with women’s rights and all, where do I come off with this mentality. Well, folks, believe it or not, if a man doesn’t pursue a woman, he won’t appreciate her the same way. Not only that, but men need to pursue women for many reasons. Not to mention the fact that when a man is interested, he will not only pursue a woman, but he will go out of his way to do so where nothing will stop him.

When a man wants to be with a woman, he’ll not only pursue her but if he’s determined enough and isn’t willing to risk losing an opportunity to be with a woman, he’ll go after her. Women these days and perhaps even women long ago have made many excuses for men as to why they didn’t pursue them. There are only two actual reasons why a man won’t pursue a woman. One of those reasons is reason enough for a woman not to find a man desirable anymore, and that reason is the lack of intelligence. If a man is willing to let a good thing pass him by (you), then frankly, he doesn’t deserve you. The other reason that a man wouldn’t pursue a woman is that he’s not interested.

Men can make endless excuses as to why they don’t go after a woman. They’ll tell her anything, and many times even lie to her or go around the bush so to speak in order to prevent her from feeling hurt or knowing that they’re simply not interested. A man will say that he’s busy, that he’s swamped with work, that he has other things going on, or he might even ghost a woman, and not pay much attention to her. Despite what a woman might think are the reasons why a man doesn’t pursue her strong enough, the ultimate and genuine reason is the fact that he’s simply not into her enough.

It doesn’t matter whether a man is using online dating, using dating services, or simply has an endless list of women that are trying to catch him, because when a man is interested in a woman, he’ll go after her. When a man likes a woman, there is no other competition for that woman. Therefore, a woman need not worry about having any competition when it comes to dating a man. If a man wants a woman bad enough, he’ll go after her, and he’ll express his love to her through his words and his actions. Remember, there must be a balance between a man’s actions and words. If a man’s actions and his words don’t match up, he might just be toying with you, playing with your mind, or having ulterior motives.

Don’t be the woman that lets a man play with her mind, her feelings, or even her body. A woman should be confident and secure enough with herself, and she should know her self-worth and not waste her time by waiting around for a man who’s not willing to go after, and pursue her. Couples should equally pursue and be giving to one another. However, during the early dating period, the only way for a woman to know if a man is truly interested is if he pursues her.

The harder than a man pursues a woman during early dating, the more that he’s interested. If a man is willing to date others at the same time as a woman after having a first date with her, then something wasn’t enough for him on that first date, and it’s important for a woman to recognize that as a sign to be more cautious. As a woman, it’s imperative to go into every new situation with an open heart and a blank, clean slate. Having said that, it’s also imperative not to let your heart fully go until you know that a man is truly and genuinely interested in you as well.

To the single women out there, there’s no use letting yourself be susceptible to a broken heart or to even let yourself be open to developing deep feelings for a man without knowing that he’s interested in you as well. It’s important to be on the same page as your partner, and you should be on that page with them from the get-go, and from the time that you start out dating each other. Remember ladies, if a man wants to be with you bad enough, he’ll not only make sure that you know it, but he’ll go out of his way, pursue you, and many times he’ll stop at nothing until he attains your love.

17 thoughts on “Men Must Pursue Women” 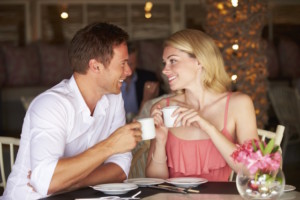 The Most Important Things to Look for in a Partner
Some things are definite must haves.