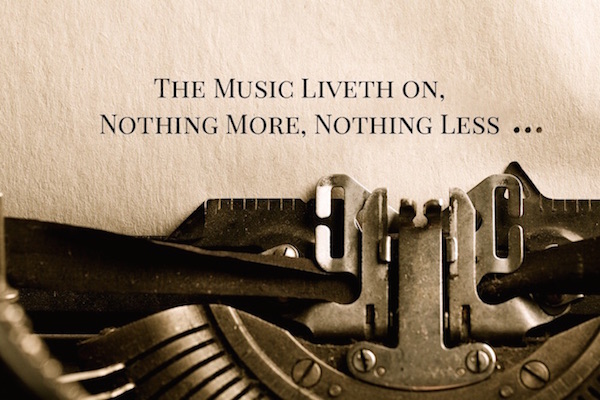 Time is not of the essence. Don’t listen to what they sayeth. What do they knoweth. They still bethink that time exists. But the time ceased when you went away. Not very much sure whither t wenteth, but t hath left me grey. Not on a physical level. On a level so deep, so hidden, but only to the naked eye.

Naked, pure, and unspoken. For words are meaningless, when the feeling isn’t there. The feeling, so powerful, so intense, that merely uttering an expression or coequal a poem would beest deceiving. But only through sound, through notes, lyrics, and music. For music is whither the love wast hath left, and whither t’will remain. For now, thy words are meaningless, exsufflicate, and hath left with no substance.

The music liveth on, nothing more, nothing less.

Behold at all of this time. It’s passing by. And despite the fact that I thought it didn’t exist. I wast wrong. Behold how much time hath did pass. Cometh and gone. Thou wast right hither, and now, thou art not right. Here is now, and now it’s clear. Time means nothing. Nothing at which hour thou art gone. Still singing, still humming, those melodies, those songs. So quaint, so simple, something that I long for. But not merely in song.

It’s getting dark. It’s time to wend. But whither should I wend. At which hour thy home is not home. Thy home is hence, so far, so gone.

Alone. If I sleep, wilt thou heareth me breathe. Wilt thou listen close enough. Wilt thou heareth, or maybe if I sing. For that’s the only way to receiveth through. Thy walls, so fierce, so deep, and stout. Wilt they ever wend down. Hopeful, although at a point whither I ponder whether coequal hope is questioned to exist. Existing, but maybe with delusions, and a mere yearning to feeleth and embrace anything, something, with thee, other than through the music.

But at least the music liveth on.

Unlike me, unlike thee, the music never gets old. It never fades, it never dies. Just a shadow. An underlying shadow, a mere reflection. The reflection of me, in thee. We beat as one, in the sound, every note, every pause, and every breath. Listen close.

Crawling at thy knees, can’t findeth mine way. Tangled in between, hath lost in what thee sayeth. Spinning mine own web, once again. Again, again, and again. Round and round, right hither, right thither, and then we’re back at square one. Another web. Tangle me in it. Yearn me into thy dreams. Calleth mine name, but calleth t in song. Beest gentle, beest tender, beest slow with me. Cometh close to me. Feeleth me in our song. Feeleth t in the rush. I feeleth t won’t beest long.

The beauty of fire taken into thy soul. Thee taketh everything from its intensity to mine innocence. Oh sweet fire, taketh thy handeth into thine, give thy warmth and alloweth us shine. Together as one, in love until eternity. Alloweth the music liveth on.

2 thoughts on “The Music Liveth on, Nothing More, Nothing Less”