As good as many of us are at knowing when someone is into us, sometimes we avoid seeing the signs of when someone is actually viewing us as just a flavour of the week. Many people will tell you what they think you need to hear in order to get what they want. They’ll play mind games, and make you think that their intentions are pure, but (clearing my throat) it’s usually a bunch of mumbo jumbo. For those out there that are looking for just a hook up, whether you’re a man or a woman, by all means, no one is going to try and stop you, or even try to change your strategy. However, for the rest of us out there searching for love, with hopes to find something meaningful, this one’s for you. I’m going to list some ways to know when a guy is just viewing a girl as a hook up, a good time, and a flavour of the week so to speak.

Now keep in mind that dating someone new takes patience at times in order to see whether or not a person’s intentions are pure. Don’t rush things too much or the early on pressure might have a “good catch” running for the hills if you know what I mean. Even a normal, good guy will run, and appear to be commitment-phobic if you pressure him too quickly. The truth is, you’ll never have to pressure the right guy. Sure, you might have to leave at some point if he never steps up to bat, but that’s definitely not during the early dating period. Remember, just because a hook up might last longer than once or twice, doesn’t mean that a guy’s intentions are pure or serious. It merely means that he enjoys it, and wants to hook up again and again.

1. He never introduces you to his friends or family.

2. He never talks about the future, or uses the words married, marriage, commitment, relationship, exclusivity, babies, or even the word “future.”

3. He never makes you a priority in his life. He puts you last, including makes plans with you at the last minute. Many times he’ll want to spend time with you when all else fails, and you’re the last resort.

4. He rarely texts or calls, unless he’s “in the mood.” It will be on his terms when he makes contact, and he’ll rarely, if ever pick up the phone when you call (unless of course you’re providing any form of intimacy).

5. He doesn’t plan things in advance. Again, you’re not a priority to him. He definitely won’t put too much effort into things. This includes how he dresses, making reservations, or planning dates in advance.

6. He doesn’t involve you in his daily life. He doesn’t share things with you. At least not the juicy stuff that he might be sharing with others that he feels closer with.

7. If he’s your best friend (which is the goal when you find your match), you’ll never just be a hook up to him. A true best friend usually wouldn’t want to explore a relationship of any sort with someone that he’s best friends with, especially not without having an honest and open book conversation with in regards to the possible consequences. As well, if you don’t view each other as friends and lovers, there’s a good chance, it’s not going anywhere other than on an intimate level. It’s important to develop a friendship with someone at the same time that you’re dating them. Friendship and dating go hand in hand when it’s right, and intentions are pure.

8. If he’s on any swiping apps, and always swipes right, he’s only looking for a fling. He’s basically the type that likes to “go fishing” and sees who and how many fish will bite. He will catch fish after fish if he’s a real charmer. Many girls are simply too naive on those swiping apps. Be weary of the right speed swipers.

9. He directly tells you that he doesn’t want or isn’t ready for a relationship.

10. He just got out of a relationship. By no means should you be dating someone that just got out of a relationship. He’ll be emotionally unavailable, and there’s a big chance that his heart won’t be open, and that he’s in need of some rebound time. As well, another big red flag would be when someone says or writes in a dating site profile that they want to build a friendship “first.” The reason that’s not a good sign is that their heart usually isn’t open to falling in love, and they simply need that slow pace, because they aren’t emotionally ready. True friendship comes naturally and doesn’t have to be said as the beginning motive when someone’s intentions are pure, and they’re truly looking for someone for the long term. Don’t expect marital intentions from this type.

11. He uses the word “fun” as in “I’m looking for someone I can have fun with.” This definitely goes for when men write what they’re looking for on a dating site profile. Fun doesn’t mean that someone literally wants to enjoy a life full of beautiful experiences within the confinement of a relationship. It actually means that they’re looking to have a “good time.” That’s usually a temporary good time, and nothing along the lines of long term. As well, be weary of men that are overly into the expression “just live in the moment” or “I just want to go with the flow, and see what happens.” You can also stay away from the one’s that claim that they must know what “it” feels like first, before having an exclusive commitment. Yes, “it” means sex.

12. He’ll do the disappearing act. You’ll start to wonder where he went, what he’s up to, or if he’s even interested anymore.

13. He usually won’t take you to dinner or anywhere if there’s no possibility of hooking up afterwards. Unless, it’s something quick.

14. If he knows when your feminine cycle is, and he disappears fully during that time, he’s not interested in anything other than sex. A good man doesn’t peace out when a woman is impure (menstruating). He merely won’t be intimate with her, yet he’ll still spend time with her. This might come as a surprise to many, but one of the best times to truly get to know a woman is when the sexual tension, and the goal of being intimate isn’t there.

15. He’ll usually only contact you late at night. He’ll want to be spontaneous, make last minute plans, late night calls, and all of the above whenever it’s convenient for him. He’ll be selfish, thinking only about when he wants to see you. He won’t consider your schedule and availability nearly as important as his own.

16. If you become intimate, but he never stays the night nor wants you to stay the night. He’s not a big fan of sleepovers. He’ll make excuses.

17. He’s not open book, he dates others, and he hides his phone. He has a double life that’s very private. Don’t expect that he’ll be sharing memories of his childhood and upbringing if he’s not that serious about you. Men usually like to share things, stories, and memories about their past experiences to some extent, and they definitely won’t do it if they view you as just a hook up.

18. As much as I hate to say it, you are who your friends are. Not exactly, no, of course not. But to some extent, the characteristics that many people get drawn to in friendships are very similar to characteristics that they carry themselves. In other words, if his friends are the bar hopping, hooking up types, then he likely is open to that as well.

19. During early dating, and without an exclusive conversation, he’ll try to have sex with you. He won’t be patient with your process. He might even peace out if you’re too slow or play hard to get. He won’t view you as a diamond, but more like a dime a dozen, and he’ll move onto the next. My advice is to let him.

20. He’ll disappear on special occasions, or make excuses as to why he’s unavailable. He won’t acknowledge your Birthday or Valentine’s Day, etc., and definitely won’t put any effort into buying you a card, gift, or even making plans (and definitely not in advance).

22. He won’t talk or text you on a daily basis. He reserves any contact with you solely for making plans, canceling plans, or talking/texting naughty things.

23. If you become intimate with him too quickly, there’s a huge chance that he’ll view you as just a fling or a hook up. He won’t appreciate you, and will likely feel that you’re the “quick type” with every guy. This is usually a huge turnoff to guys that are looking for “marriage material.”

24. I don’t have the exact percentages, so if you’re looking for them, do your own research. My research tells me that 90% of guys looking to be with a much older woman are just looking for a hook up (even if it’s a repetitive hook up).

25. If he only texts you, but rarely or never calls you on the phone. 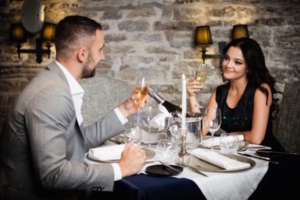