There are certain things that people can do when they’re dating or in a relationship to show their partner that they care. Giving your partner attention is one of the best ways of showing that you’re into them. In a healthy situation, giving your partner attention should never scare them away, but bring them in closer. I wrote this article because I wanted to share some reasons why I feel that it’s best to be your partner’s biggest fan. I truly believe that when you’re his biggest fan, you will both benefit from it in many ways.

It shows how supportive you are in the things that he does, whether they’re accomplishments or any type of achievements. Being supportive of your love is one of the best ways to stay close, which helps build a long-lasting relationship. Being supportive means everything to a man.

Whether he says that he wants your approval or not, he does. When he’s into you, your approval will mean a heck of a lot to him, and definitely more than other people’s approval of what he’s doing or has accomplished.

He wants you to be proud of him. This could possibly be routed to the way he was raised growing up. Either way, he wants you to be so incredibly proud of him, that you feel honoured that he’s yours. Being proud of him will feed his ego, and whether the ego is good or bad, feeding it isn’t a bad thing when you love him.

It will bring you closer and if you’re not already best friends with your lover, you will be soon enough, when you give him the love of being his biggest fan.

It shows that you care about his happiness when you’re his biggest fan. It’s a way of expressing your love to him outside of the bedroom. Despite how important the bedroom might be to him, supporting him in all that he does is a huge part of having a solid foundation together. It shows that everything’s not always about you and that you get pleasure in his successes.

7. Giving Back the Love:

You’ll be the first person that he comes to when he wants to share things, whether good or bad. Isn’t that something that you want! It’s important that you are his biggest fan so that when he succeeds at something, you’ll be the first person that he runs to, to tell about it. When he doesn’t succeed or if things don’t go as well as planned, he’ll come to you as well. The last thing that you want is for him to run into the arms of someone else to celebrate or to cry on their shoulder.

9. It Gives Him Strength:

As the old saying goes, a good woman at home is a successful man at work. He’s likely to succeed much more and accomplish his goals and dreams much better knowing that he has a strong backbone and support system at home or in his partner. When a man knows that his partner or his loved one is rooting for him, he’ll have the enthusiasm and desire to go much farther in life. Having a loving woman as a partner gives a man more courage and strength to do his best. A good woman at home or with a partner can make a man shoot for the stars and conquer the world, or try to at least.

Last but not least, being his biggest fan is the best way for him to know that you love him. Love can be expressed in many ways, but when someone completely loves and adores you and shows you in their actions by rooting for you to succeed, it’s the biggest way of expressing your love to your partner.

One thought on “Dating: 10 Reasons Why You Should Be His Biggest Fan” 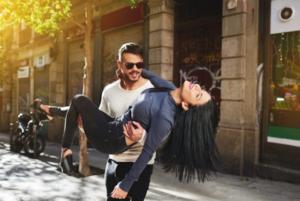 Are We Meant to Be?
What it takes to create the fairy tale.