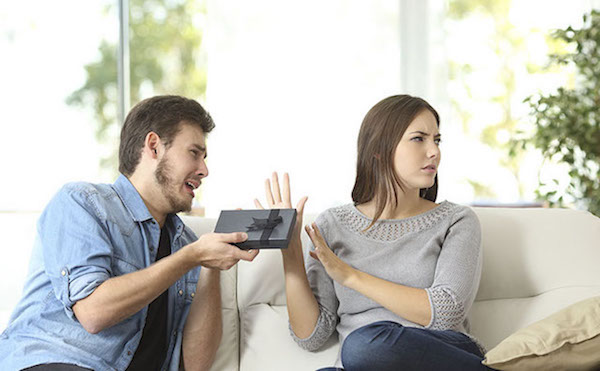 While I am certainly no relationship expert, I do have a significant amount of experience with turning guys down. I wasn’t the most popular or prettiest girl around when I was younger, but I did have quite a few guys trying to vie for my attention and I regularly refused them. I had someone in mind already, and I felt like other guys being interested in me would be a threat to that. Often times I ended up turning guys down for dates, dances or gifts they were trying to give me. Unfortunately, you could say I wasn’t exactly great at it… I’ve never actually been good at dealing with boys.

My friends who were around for those years like to bring up the embarrassing ways in which I dealt with guys in my younger years, but now I know what not to do and have some amusing stories to boot. Eventually, I learned a better way to decline an invitation or an unwanted advance and let me tell you, my methods now are much different and more effective.

Here are my suggestions for how to turn someone down (brought to you by my personal experiences of how you shouldn’t do it)!

#1 Be Direct and Honest

When I was asked out in high school and college, I wasn’t very good at being direct, which left the guy interested in me with an open door to try again later. One guy in particular regularly offered to drive me home from a volunteer place I worked at even though he knew my father always came to pick me up. I made excuses about why I couldn’t, even on days when my parents might have preferred to save the gas and money. He never got upset about it, thankfully. Even so, one day I started ghosting him so I wouldn’t have to answer his questions in the first place.  I went from taking a different hallway to taking a different shift to avoid his attention and confrontation.

I couldn’t deal with the uncomfortable, sinking feeling I got around him, so I did my best to ignore it instead of dealing with it. After weeks of telling myself that he didn’t mean anything by it, but my gut telling me otherwise, I took the easy way out by ghosting him. Now I wish I would’ve just told him that I wanted to clarify I wasn’t interested, instead of stringing him along for months. He probably would have appreciated that, and I would’ve saved myself a lot of time not using the children’s tunnel toys to get across the building trying to avoid him.

Moral of the story: Don’t be a chicken, tell the man the truth!

Okay, I did say tell the truth, but maybe not the whole truth.

I went to a dance with some of my girlfriends once. They thought they needed to find me a man. After asking for my physical preferences in a guy (which I had never had a list of that before, so I made one up on the spot), they rushed to find someone who met the qualifications and was in need of a dance partner.

They brought back a nervous guy in a cowboy hat. I anxiously tugged at my purse strap, looping it sideways from one shoulder to the opposite hip so it wouldn’t fall off as he led me onto the dance floor. Jason Aldean’s “She’s Country” blasted through the speakers as this poor sap tried to sweep me up in his arms and two-step with me. We danced around in a circle, his cologne filling the space around us. It was a vaguely familiar scent from someone in my childhood that sent me into more of a panic than I already had been in.

Throughout the whole song, I managed not to step on his toes, but I immediately took his hand off my waist after recognizing the smell as I fought back tears. All I said was a brief apology and that I didn’t like his hand there. He looked a little bit confused, presumably because he couldn’t hear me over the music, but I managed to position my purse to where he could touch it instead of me.

Had I given into my normal rambling when I get panicked, it would have been an unnecessary over explanation and spilled some personal information into that sphere of my life.

He, as a stranger, was not entitled to my history in order for me to request he stop touching me. You don’t have to have an explanation in order to turn someone down or change a situation with a guy, but short and sweet explanations are often the best bet.

Unless the man is being physically or emotionally aggressive (in a bad way), there is no need to try to hurt him when you turn him down.

In my young years, I was unaware of men having feelings. It might sound ludicrous, but it is true. Blame it on the media and pop culture, but I genuinely thought men had hearts of stone. Because of this, when I was younger, I said and did several different things on multiple occasions that inadvertently crushed some male egos or, alternatively, egged the guy on (kind of like pulling pigtails, but reversed).

Due to some unhealthy influences in my life, I was verbally and physically on-guard with males and any perceived threat pushed me to overcompensate and “defend” myself because I thought that men don’t listen when you say no or pull away emotionally.

On one occasion in high school I had a guy give me a necklace, try to hold my hand, and randomly touch my torso after only meeting three days before. I grew up in a culture in which “no-touch” courtships were the norm, so not only was I mortified by the escalation of unreciprocated physical affection over a three-day period, but I was scared to death that I was somehow in trouble because he’d touched my hand and sides. In an attempt to be polite and courteous, I had been spending my lunch breaks with him and one of his friends, and it backfired on me.

I was known for being the girl who was particularly oblivious about the intentions of the guys around me, so it wasn’t a surprise to anyone but me when he gave me a necklace wrapped in a note asking me out in front of the entire cafeteria of our classmates. Though it is probably needless to say, I didn’t take it well, and he didn’t take my rejection well.

If I had to go back and do it over, I probably wouldn’t call him a creep to his face. Or thrown the necklace back at him in front of his friends…

Bottomline: When you turn a guy down, try to be honest about whether or not they have a chance with you at all or if they might in the future, don’t over explain yourself and for the love of all that is holy, don’t be like me and say or do something that hurts a guy who doesn’t deserve it. Be kind, honest and succinct.

2 thoughts on “How To Turn A Guy Down”