Have you been out in the dating scene for awhile, with no luck finding your match? When you’re single in the dating scene, looking for that perfect match, sometimes people settle for less than what they were looking for. When you’re single, you should have some sort of idea of what you want in another person. As well, you should have some idea of what works for you and what doesn’t. When you truly know yourself, and you know what you’re looking for in someone, you’ll be way ahead of the game towards finding your match. However, sometimes we meet people who seem like they’re a good match, but they’re lacking one or two things that are truly important to us. Sometimes, we even consider settling for them, not viewing it as settling at the time. Well, settling is exactly what you’re doing!

I don’t believe that anyone is perfect, or that we can find anyone that’s perfect. When you know what things are most important for you to have in another person, you should make sure that they have all of those things, and nothing less. If you truly believe in love, then you shouldn’t settle for less than what you want in another person. Have you ever played a puzzle and some of the pieces almost fit together? Have you ever tried to make them fit, even if they don’t exactly fit? That’s basically what you’re doing, if you find someone that’s “almost” a match for you. You’re settling by putting two puzzle pieces together that aren’t supposed to be together. You need to find the best possible match that fits with you perfectly.

When we’re in the dating scene, sometimes we have wounds from previous relationships, but we’re out there dating anyway, and way too soon. You need to have an open heart when you’re trying to date someone new. You have to go into a new situation with a blank, clean slate. You shouldn’t go into a new situation with a bunch of wounds from previous relationships. It’s unfair to the person you’re going to be dating if your heart’s not open and theirs is. I’ve mentioned how imperative it is to go into new situations with an open heart before, but I’m saying it again, because of how crucial it is when dating someone new. Once your heart is open, and you find someone new, make sure you’re not settling for less than what you want, based on your previously failed relationship.

You should be concentrating on getting to know each other and seeing if you’re a good fit. Ask each other healthy, positive questions, and get to know their likes and dislikes. Keep it light! Find out if you both want the same things in your future. Talk about your lives in the present, now, and in the future (your goals, dreams, etc.), as opposed to talking about the past so much. I’ve never been a fan of people who pried into my past on a first date or during early dating. It’s good to get to know someone, but it’s also good to take the time to get to know them. It shouldn’t feel like someone’s forcing you to tell them your whole life story on the first or second date.

As people get to know each other more and more, they’re naturally more comfortable opening up and talking about their past a little bit. However, there’s no need to pry, and there’s no need to share recent break up experiences in great detail. Give your new situation a real chance, just like a newborn baby. Every new relationship, as well as, every new person that you’re dating, deserves a real chance and should have a good shot at being your next love. If you’re going into a first date as a whole person, without any personal issues, past drama, or fears from previous situations that you felt hurt or taken advantage of, you should have a real chance at a new, happy beginning. 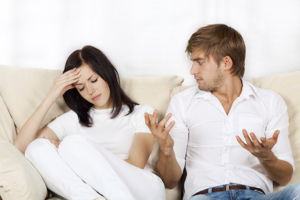 You Can’t Force Someone into a Commitment
Someone either wants to be with you or they don't.