Oh, the joy of dating! Sometimes it’s easy to tell when someone’s into you, sometimes it’s not, and if only there was a way to know whether or not someone is interested – without having to read the signs. If only it were that easy. But then again, that’s why I’m here to help.It’s unfortunate that we have to read people, because that’s what makes dating so difficult. We shouldn’t have to. We can all do our part by being direct and honest about whether or not we like someone, but we can’t change the bad habits of others in this regard.Therefore, I wanted to create a list of 29 ways to know that he’s not the one for you. But don’t worry, just because he’s not the one, it doesn’t mean that you’re not going to find your match. So stay optimistic when looking for your true love, because when you least expect it, you likely won’t have to look for the signs, and you’ll just know.

1. He treats you like an option, not a priority.

3. He doesn’t try to connect with you at least once a day.

4. If you’ve been dating for a while, yet you haven’t met any of his friends or family.

5. He doesn’t put any effort into dating you or making plans.

6. He doesn’t express his feelings to you, and you’re questioning how he really feels.

7. He doesn’t tell you or show you that he’s into you by his words or his actions.

8. You met him online, you’ve had more than a few dates with him, and he still has an active online profile that he logs into.

9. He’s dating other people at the same time.

11. He doesn’t pick up the phone and call you, he only texts.

12. He hasn’t told anyone about you. You’re kept on the down low.

14. He only calls you for spur of the moment, spontaneous, last-minute dates, and without any notice.

15. He lacks good communication skills, and isn’t willing to improve them.

16. He tells you he’s not ready for anything serious.

17. You’ve dated him a while, but he tells you that he prefers to be friends first, and prefers not to have a label.

18. He just got out of a relationship, and he’s looking to have “fun.” I’d also avoid him the word, “fun” is written in his online dating profile.

19. You both ultimately want different things in life.

20. You have tension with him from the get-go, nothing seems to flow, and everything – including his feelings towards you feel forced.

21. He ghosts you, does the disappearing act, and then comes back weeks or months at a time to date you again.

22. He plays mind games with you, where you feel the need to question what he means by what he says all of the time.

23. He’s abusive in any way, put you down, or is cheating and playing around with others (even if you’re not exclusive, so technically it wouldn’t be cheating – just shady).

24. He questions you in a way where he lacks trust. He acts suspicious about what you do with your time apart, who you’re hanging out with, and makes you feel that you’re untrustworthy – when you know that you are.

25. He’s rude to waiters, workers, and his employees. He seems to get into regular arguments with random people on a daily basis. He lacks manners as well.

26. He constantly talks about his exes, and even worse, he talks about them in a negative manner.

27. He talks the sexy talk, but when it’s time to have real conversations on a deeper level, he avoids you and the conversation at all costs.

28. He lacks gratitude and appreciation. He never says please, thank you, and even comes off as arrogant.

29. He tells you directly that he’s not interested. The obvious way to know. 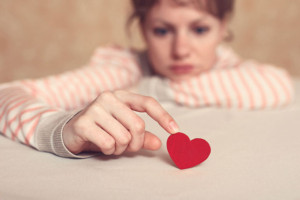 8 Ways to Get over Someone
Let's hit refresh, and start over.