When it comes to dating and relationships, it’s important to know what you want. Many people want what they want, and won’t settle for less. That’s not necessarily a bad thing, but it’s important not to be too picky, and turn away any prospects that show potential at being a good match. Just as much as it’s good to know what you want when looking for your match, it’s also important to know what you don’t want. As well, you should get an idea of what works for you and what doesn’t in a relationship. There are a few things that almost every guy has an aversion to when it comes to being with that one special girl. The following is a list I’ve created to point out a few of those things, and to spread the word to those women out there that are self-aware enough to recognize these qualities within themselves, and change them for the better.

Every man wants to be loved for who he is, as opposed to what he has. When the question arises in his mind, his partner’s mind, or in the mind of anyone else that sees them as a couple, “Is she with him for love or money,” a man wants to know that the answer will hands down always be for love.

Nothing is more unappealing to a man (or to a woman for that matter) as someone that’s arrogant. Just as much as a woman tends to have an aversion to the alpha male type (at least, all of the woman that I know), a man can’t stand a snobby or arrogant woman. Being humble is something very appealing to almost everyone, despite their gender.

The one thing that can help all relationships is when both people are equally giving to one another. By giving, I’m referring to being giving inside and outside of the bedroom. Being a giving partner is something that most if not, all men will appreciate. Effort costs nothing, and when it comes to showing your partner how much you love and care for them, there are a million ways you can express your love. It’s important to do things for your partner in a selfless manner, and many times you can do so by putting them before yourself. As much as a man loves a selfless partner, he also has an incredible aversion to a selfish one.

When a woman acts entitled, as if she’s the queen bee of the world, and better than everyone else, it’s a huge turn off to a guy. A man wants his woman to appreciate him, and to even feel surprised at times for sweet gestures that he might do for her. Having said that, when a woman acts entitled, and as if she’s expecting a certain type of treatment or standard of living, it’s a huge turnoff to a man. As well, many men tend to avoid dating the high maintenance type.

Men can’t stand to be ignored or treated as an option, rather than a priority. I suppose women feel the same way about this one, because I’m sure that everyone wants to feel special and to be given enough attention. Men generally don’t like it when a woman is on her cell phone too much, at least when they’re spending quality time together. It’s important to be in the moment when you’re doing anything in life. No one will feel special and as if you even care for them very much, if you don’t put your cell phones away at times. Men don’t want a woman they’re on a date with to be on her phone texting, responding, talking, or on her social media accounts updating, liking or posting pics nonstop. Frankly, it’s rude whether a man or a woman does it when they’re right next to you, despite that many people feel as though it’s become the norm. Another thing men don’t like is when a woman never makes eye contact with him when on a date, and looks around the room and at what else is going on, to the point where she might not even notice if he’d leave the table.

The last thing a man wants is a woman that’s too needy, clingy, or fully dependent on him. Even when a guy appreciates the stay at home, old-school type, he still wants her to feel happy, fulfilled, and independent to some extent. Men admire women who are strong, independent, whole, and who feel happy as individuals, and don’t act or feel needy or clingy. Everyone gets a little busy sometimes, and no man will want to be glued to a woman and feel guilty for having to do his own thing at times. A little independence can be a good thing.

7. Being fake and superficial:

A man loves his woman to be real, genuine, and sincere. He wants to know that not only his woman loves him for who he is and his personality, but that she herself is a woman of her word. A man views a woman as classy and appealing when she’s comfortable in her own skin, confident, and not afraid to let her hair down so to speak. Generally speaking, a man wants a woman that he’ll be attracted to inside and out. He wants her to be her genuine self, as opposed to some version of perfection that she wants to portray. Many men can’t stand women that play mind games or that have layers and layers of digging before they can see who a woman truly is on the inside. Men like women that are genuine and real from the get-go. It’s the imperfections in women that many men find appealing at times.

Every man wants to feel that his partner appreciates him and all that he does for his woman. Nothing can make a man stop giving to his partner as much as the lack of appreciation. It’s important for women to concentrate on all of the positive things that her man does, and all that their relationship has, as opposed to what it lacks. When they do this, they tend to appreciate their partner a lot more. 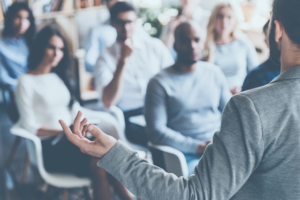 How We Can Benefit by Having Role Models and Observing Others
Having role models, observing others, and striving towards enlightenment.