Many people are hoping to find a match in life that is just like them. There are some that long to find someone that will like and appreciate all of the little things that they do from their hobbies, their eating habits, to their lists of favourite things that they enjoy in life. Many people say that opposites attract and that there should be a ying and yang to relationships. Sometimes relationships work out wonderfully when two people are very similar and share many common interests. But, many times couples prefer to have certain differences that will end up complementing each other’s lives for the better, making things more exciting, and giving each other a chance to learn new things from one another. Many times it’s a couple’s differences that bring the right amount of balance in their relationship. My feeling is that it doesn’t matter whether your hobbies, interests, or what you might view as exciting in life are all the same, as long as certain things are.

Two people that have many differences in relationships can thrive just as well as two people that have many similarities. As long as those differences aren’t morals, core values, and beliefs. Two people that want to have a life together and are hoping for it to last don’t necessarily have to agree on everything or enjoy all of the same things. I’m not just talking about having a life together, but a healthy and happy one, where they both can thrive happily in the sanctity of a long-term relationship and marriage. A couple needs to be the same at their core. In other words, when it comes to big issues, family values, how to raise kids, and core beliefs, meaning what type of person someone truly is deep down inside, they need to be one and the same.

If one person is giving by nature, likes giving back so to speak, and helping others that are less fortunate than them, whereas the other person views these things in the opposite manner (if you’re wondering, yes, people like this truly exist, and many of them), then their core values are quite different. This was just one example because there are many I can give. Another example could be that two people have different feelings when it comes to spending time with family and putting families needs and wants as a high priority in their life, whereas the other person doesn’t, and wants to be completely independent from their families. This is yet another core value that needs to be the same for couples. For this example, the reason being is that if two people aren’t connected in their beliefs when it comes to family and things of the sort, they tend to feel alone at times when they should feel supported, loved, and anything but alone.

Think about it, do you really want to spend time with your family alone, and without your partner by your side? I know many couples that feel alone in this manner, yet they suck it up being that this was a decision that they made and are living with it. This also goes for marrying into different religions and cultures when one of the people isn’t truly embracing it and them in the manner that they should. Trust me when I say this, they don’t thrive in a happy state as they should. It’s imperative to discuss your intentions and feelings on important matters during the early dating period, and not when you’ve already committed to someone for life.

It’s more than just core values that need to be the same in relationships. It’s having the same ultimate goals in life. It’s wanting the same things in the future as one another. As well, it’s being able to agree on most big issues, so that when push comes to shove, and there’s an issue in the relationship, the couple will stay grounded, and maintain a calm, loving, supportive, understanding, and happy relationship. If couples don’t talk about big issues that could come about later in life while they’re in the process of dating, and early dating I might add, they could end up staying together yes, but it will likely involve some type of turbulence, uneasiness, or unhappiness for the couple. This is why big topics should be covered during early dating and people should find out if they have the same core values, beliefs, and ultimately want the same things in their future.

During early dating, when people avoid big topics, make small talk for a long period, and eventually develop feelings for a person without even knowing who they truly are, it can waste a lot of time for both people. Knowing how a person truly is, one must know their beliefs on certain subjects and issues. It’s one thing to be a free spirit, and be an easy-going type of person, but it’s another thing to be someone who avoids confrontation, big discussions, or debating and talking about important topics. People should never be afraid of confrontation to the point where they can’t get their feelings across, or where they know that they won’t be heard, merely because the other person is avoiding confrontation or drama. If a person is avoiding talking about big subjects, or avoiding confrontation in any way, it’s possible that the relationship is toxic, their intentions might be impure, and you might have to reevaluate your relationship with them altogether.

Many singles out there are looking to find someone that’s almost identical to themselves. They do so for many reasons. One of the reasons could simply be because they’re arrogant and love themselves so much that they want a twin, and they might not even realize that they’re doing so. Another reason that many singles tend to look for a person that’s almost identical to them as far as having the same interests, etc., is simply because it’s their safe zone, and they feel that the other person will be completely understanding, and “get it” so to speak. The only time that this method will truly work is when single parents are going out of their way to date other single parents. Don’t get me wrong, single parents don’t necessarily have to date single parents. But, many single parents out there prefer to date other single parents being that they feel that they’ll understand their situation, will be able to relate, and basically “get it,” and know that their kids will come first, etc.

Dating someone that is just like you, with so many similarities as you, and in the things that you’re interested in, could actually not be as beneficial as couples might initially tend to think. The most successful couples that I’ve come across are couples that share some common interests, and that connect on many levels, but they don’t agree on everything. Those successful couples might be very opinionated at times and feel differently about a lot of things. They might even bicker a good amount. But, let’s get this out on the table right now! Bickering which is rooted from having differences of opinions can turn into intense passion, crazy good chemistry, and be quite beneficial, not mention a great side effect to spice things up in the bedroom. The most important things for couples to have and maintain a happy, healthy and successful relationship are having the same ultimate goals, the same core values, and the same or similar beliefs. At the very least, they need to respect each other’s beliefs if that’s the only big difference.

For those who are searching for their love, it’s important to keep an open mind, and realize that your partner might have different hobbies and interests as you, you might enjoy eating different foods, or one of you might drink alcohol, whereas the other person never drinks, but these things and many other things like them are superficial, and unimportant in having true happiness and love in relationships. Just remember to ask the big questions upfront and during early dating, so that down the line there won’t be any big surprises. I personally like to get those heavy questions out of the way so that I know that I’m on the same page with someone. As well, I try to communicate my feelings about being on the same page, so that we can truly and happily walk hand-in-hand together for now, and for life. 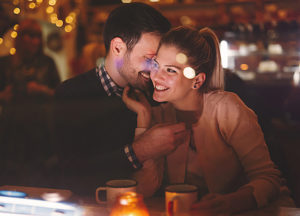