When a woman is too strong, it can either be quite appealing to a man, or quite the contrary. Strength in a woman is something that not every man can handle. A woman is usually strong, because she’s secure and confident in herself. And I can’t stress enough just how beautiful that is. However, when it comes to dating a strong and confident woman, it takes a very secure, confident, and strong man.

When a man is insecure or even when he’s intimidated by a woman’s beauty, intelligence, or even her confidence and strength, he might not be the best match for her. However, everyone has the ability to improve their confidence. But if a man is insecure, and he’s not willing to improve his confidence, he’s likely not going to be able to handle being with a woman who has a lot of inner strength.

We all have a best possible match out there, so if a man isn’t able to handle just how strong and confident a woman is, he can either work on himself, and improve his confidence, or he can be miserable and stay in the situation. But I can honestly tell you, that if a man is insecure or less confident than he should be, and he feels intimidated by a woman’s strength, then he’s likely going to end up feeling even more insecure than he already would.

Not every woman has a lot of inner strength. Which is unfortunate, but true. But when a woman does, she radiates, and she has the ability to illuminate a room where she’ll come across as confident and even more beautiful in her exterior. A strong woman doesn’t necessarily have to be beautiful on the outside, but when a woman has enough inner strength, it exudes from her, and will come across to others as confidence. And frankly, it’s one of the most beautiful qualities that a man can find in a woman.

When a man has hopes of attaining the love and affection of a strong and confident woman when he’s more of the shy type or when he’s a bit insecure in his ways, there’s still nothing wrong with him going after what he wants. And if anything, I highly recommend that he does go after what he wants. Everyone deserves to have the person and the love that they dream of. But something that he really needs to understand is that a confident and strong woman will likely feel the desire to be with a confident and strong man.

So if you’re hoping to go after that strong and confident woman of your dreams, and you’re more of the insecure type, work on yourself, build up your confidence, and strive to be the best version of yourself. We all deserve to have everything that we want in life, as long as we’re willing to work for it. And sometimes working for it, means improving ourselves, and building up our own confidence to the point where we feel worthy of deserving the love of even the strongest of women. 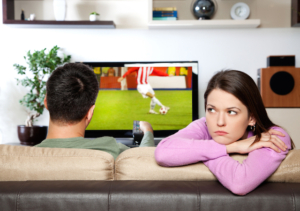 When Your Partner Never Wants to Go Out
Compromise is essential in a healthy relationship.