Dating is hard enough, when we’re not expecting a person to be absolutely perfect. I’ve heard many people talk about how they’ll go on many first dates, and how they’ll explore situations that will usually end before they even begin. One of the biggest mistakes that I see many singles making these days, is that they’re searching for perfection. This will usually cause people to have many first dates that never lead to second ones.

Many people give up on a person or on a situation, before they even give them a genuine chance. We are all human beings, and we’re bound to make mistakes at times, and even have a few flaws. And yes, I’m sure that we’d all like to have that perfect package with every little thing in one person, but simply said, that’s unrealistic. We can’t expect to find perfect or perfection in any one person.

We should give situations a chance when we feel that they’re promising. But unfortunately, what many people are doing, is ending situations before they’ve given them their all. And no, you shouldn’t give every situation a chance—only those promising situations where certain things are aligned, like what you both ultimately want in your future, a similar time frame, chemistry, and enough compatibility. But the problem is that many people end things after they find one tiny flaw or imperfection, and the bottom line is that they’re giving up way too early.

A lot of people get nervous or even act awkward on first dates. Sometimes this happens, because they’re socially awkward or shy, or even because they just get nervous and overly excited by first dates. You have to expect that people might say the wrong things or stumble and say something wrong on occasion. Now don’t get me wrong, there are certain things that someone should never say, and rudeness to waiters and things of the sort are completely red flags. But when someone says or does something that isn’t just as you might like it to have been, give them a break, and give yourself a break by not having such high standards and unrealistic expectations.

The truth is, no one is going to meet those types of standards, where someone can’t mess up once in awhile. Even you will mess up at times, and you don’t want to be judged for saying or doing one little thing wrong. And at the very least, wait for the second mistake before you end things abruptly. My main point, is that you shouldn’t give up too early, and definitely not before giving a promising situation a genuine chance.

One thought on “Dating: When People Give up Too Soon” 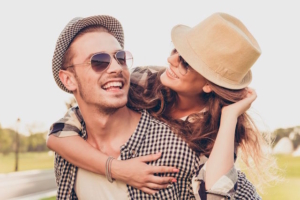