People that live with guilt either have an issue with letting things go, they take perfectionism to the extreme, possibly have self-destructive personalities, or have done something to hurt someone else in some way that was based on having bad intentions. Many times people that feel guilty for a long time for something that they’ve done wrong, end up living with guilt for all of, or predominantly the most part of their lives, because they did whatever it was on purpose, and it wasn’t unintentional.

Many times, people take advantage of the words, “I’m sorry,” and overuse them, thinking that it will make everything alright, if they just apologize. Many times people think that they can get away with whatever they want to, and just apologize later. In other words, some people do what they want, because it satisfies them, knowing that it could possibly hurt someone else, and figure that they’ll just deal with the consequences later, and apologize to the person. All I have to say about people who do things like that is, not cool.

Many times there are situations where you’re dating someone that’s making you feel like you’re in a one-sided situation. Perhaps you’re in a relationship where you feel that it’s one-sided, and you’re the only one giving, or perhaps the other person keeps doing things that cause you pain in some way.

Let’s assume that a person has realized that they’ve hurt you in some way, and now after a certain amount of time, they come back into your life feeling remorseful and apologize. They tell you that they’re sorry, but they do the same thing again, and again, and again. How many times should you forgive someone? How many times should you let someone hurt you? Whether it’s emotional pain, being let down a lot, being led on, being emotionally or psychologically abused in any way, how long should you put up with it?

Well, those might seem like very difficult questions, except for the abused part, as I think physical, sexual, and psychological abuse are definitely reasons to leave any situation, and immediately. As far as how long should you put up with it when there isn’t abuse, my answer isn’t complicated, and it’s really quite simple. You should leave immediately, but there’s only one exception. If a person is loving you in a one-sided relationship, and they haven’t done things for you or reciprocated your loving and selfless gestures, then you can have a discussion with them, communicate your feelings, and see how it goes. But after communicating your feelings, if the other person still doesn’t change, time to say adios!

If you think that your relationship or situation can be saved by talking about it, and you’re not married yet (there should be many extents that you should go to in order to save a marriage), then talk about it, and see if anything changes. If nothing changes after you discuss things with your partner, it’s time to head for the door. Remember, breakups are permanent, and you shouldn’t go back to someone when they have a history of hurting you, and apologizing, over, and over, and over again. Sometimes you just need to say, peace out!

It’s always a good idea, although it may be hard to do, you should accept a person’s apology when you see that it’s coming out of a genuine place of remorse. You don’t necessarily have to be with a person again, because they apologize, nor should you. However, you should accept their apology, despite how hard it may be for you to truly forgive them, so that it may help them in relieving some of their guilt. Bare with me here! It takes a very high conscious type of person to be able to do that, but it’s a truly beautiful act.

Relieving someone of their guilt by accepting their apology, and forgiving them even, can be what it will take to help that person grow, and learn from their mistakes, especially, when you ended your situation with them, because of their mistakes. You’re already leaving the person or ending that situation, because of what they’ve done wrong. Therefore, they’re likely to feel guilty for what they’ve done wrong, they’re possibly very remorseful for having hurt you, or disappointed you in some way (repeatedly), so why cause that person so much pain by not forgiving them. The worst thing that you can do to someone who truly loves you is leave them. Of course, you’re not leaving the person out of a bad place. But, you’re leaving them out of a good place, so that they may grow, and so that you can be with someone who will treat you the way in which you deserve to be treated.

It can be so hard to let someone go that you’ve grown attached to, but sometimes it has to be done so that you may grow and find your true love. The person who you’re supposed to be with in life will treat you good, and in a kind manner, and will do anything not to hurt you, let alone hurt you, or treat you poorly, where you feel like you’re in a one-sided relationship, etc. Your true love won’t be wishy-washy, running in and out of your life, as if you’re so easily replaceable. Your true love and soulmate will go to the end of the earth to protect you from feeling any pain and will despise anyone that ever tries to hurt you, let alone hurt you themselves. Your true love will embrace each and every moment that they have to spend with you in life, each and every breath that you take, and adore, and appreciate every little thing about you.

You should know your worth, and not let someone treat you in a bad way while you’re dating or in a relationship. We all deserve to be loved and appreciated for the things that we do, and all of our kind gestures that are done out of love. You should never feel that you’re the only one giving in a relationship, or that your partner has a hard time staying in a committed relationship with you, that’s based on honesty, trust, and being faithful. If you’ve gone through something painful recently, or know someone that has, it’s important that you or they understand that life is truly beautiful, but you have to close some doors in life, in order to open other doors, so that you may see the beauty. This world is filled with beautiful, new opportunities, and we all get many chances in life to start anew and create a brand-new, beautiful situation for ourselves. I hope some of you were able to benefit from this article. Wishing you all a beautiful day and week ahead. 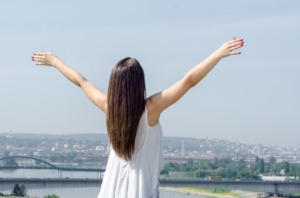 Creating a Motivated Mentality
Shake off your laziness, get up, and go!