When it comes to dating and exploring relationships, it’s important to be able to let down your guard and be “vulnerable enough” to develop feelings for someone, and potentially – fall in love. You have to let down your guard and feel things, vibes, energy, and hopefully, an incredible connection – something with substance. It’s really the only way. You have to risk being vulnerable and getting hurt, in order to have the chance of having everything your heart desires… love. This is why you should be cautious, but not scared when dating.

Be Cautious, Not Afraid

When it comes to dating, and even more so, when it comes to online dating, searching for your other half with no luck can become deflating at times. There are people that have been on dating sites for years, and there have been people that have been single, and on the market for way too long. When someone has experienced the dating scene for too long, dating altogether may start to become a drag, and a person can even become jaded, scared, or lose hope in finding real love. The dating scene in Los Angeles, as well as in many other big cities, can be quite intense at times, and possibly more so than in small towns where there’s actually less to choose from. Having less to choose from, doesn’t necessarily make it harder to find someone that will be a great match for you. Many times, the more options that we have, the harder it can be to decide on a person.

The longer that people stay single, the more that they tend to experience heartache, disappointment, and they might even get tired of dating altogether. Of course, it does depend on how long someone has been on the market. When people have been dating for so long, and with so many disappointments of not finding their one true love, they might experience a certain amount of heartache. When people have explored many different situations, they’re more likely to have some wounds, and extra sensitivities and they might even bring those wounds (like baggage) into new situations.

Some people have even closed up, built a wall, and have become afraid or scared to fall in love, because of some previous heartache that they’ve experienced. Those people that are afraid to get hurt are still on the market, and still looking for their true love. The problem with those types of people is that even if they found that special love, they likely wouldn’t even recognize it, because they’re too scared to let anyone inside, and get a glimpse of who they truly are. They’re simply not open to falling in love, no matter how good of a match you might be.

I always write about the importance of going into new situations with an absolute open heart but going in with caution. This especially goes for people that date having met someone online. When you date people that you’ve met online, many times you really don’t know what you’re going to get. It’s important to go into every situation with caution, but not fear, because fear will prevent you from falling in love. If you’re anything like me, I can tell pretty early on if someone is afraid to fall in love and afraid to let anyone see the real person inside of them. The worst thing is when people are afraid of commitment, yet they’re still dating.

I’m one of those people that goes against all of the rules during early dating. I’m not afraid to use a few keywords or trigger words so to speak during early dating. I figure that if someone is afraid of certain words like commitment, relationship, marriage, or babies, then they’re likely not the match for me personally. If people peace out when I use those words during early dating, that’s always been fine by mean, and by all means, peace out. You can’t lose something that you never had. For those that don’t date with marital intentions, and are just looking to have fun, this is irrelevant to you.

For all others that are hoping to find something meaningful, that will lead to marriage, and like me, they only date with marital intentions, this pertains to you. Anyone that’s afraid of simple words from a simple vocabulary isn’t interested in anything long-term or meaningful. It’s important to know early on whether two people ultimately want the same things in their future, and they shouldn’t have to filter or hold back from telling the other person their ultimate goals.

Dating with marital intentions doesn’t mean that you’re going to get married immediately, it merely means that your ultimate goal is to get married, and possibly have children if that’s what you want. It’s always important to be direct, honest, and upfront about what your true intentions are with another person. If someone is scared and leaves simply because of the fact that they’re perceiving you as being too upfront, and only having marriage on your mind, then they’re likely not the right match for you, so you should let them go, and move on. They’re basically just projecting their fear.

Marriage doesn’t have to be the topic of all of your discussions if that’s what you’re ultimately hoping to achieve. However, there’s nothing wrong with using words like marriage, married, engaged, babies, and all of that fun stuff that people a lot of times avoid talking about during early dating. Just because someone talks about what they want in their future, and even if they want it sooner, rather than later, it doesn’t mean that they necessarily know already that they want it with you personally. Those are just their goals and dreams that they hope to attain, and it’s important that you should be aware of what your partner or the person that you’re dating wants in their future. When you know what each other wants, it doesn’t necessarily speed things up, but it can depend on the circumstances. But, you shouldn’t be afraid of sharing your feelings or sharing what you ultimately want in life. If a person rushes you or puts pressure on you, that’s a different story.

When someone is scared of falling in love, let alone being in a relationship with you or even remotely considering marrying you, they’re likely going to be afraid of using those trigger words themselves, and definitely, they’ll be afraid of you using those words. You should listen to your instincts, and if you sense that someone is scared, move on. It’s important not to get caught up in a situation that’s not right for you, and if someone is avoiding any serious conversations about what they want in the future or avoids or lacks curiosity of what you want one day, I’d end that situation, before you start developing deeper feelings.

People should date with caution and without fear. No one should be afraid to fall in love or to get into relationships, because that’s the only way to find out if you’ll be a good match down the line. You have to explore relationships, have an open heart towards falling in love and be willing to get hurt if that’s what goes down. It’s true what they say, that love hurts, because love does hurt sometimes, and especially when we don’t get what we want out of a relationship. However, just because one or many situations don’t end how you’d hoped or if you’d hoped that they’d never end, it doesn’t mean that you should give up on love or build walls to protect yourself from getting hurt. If you do that, your heart won’t be open, and you won’t be able to fall in love.

3 thoughts on “Being Cautious vs. Being Scared in Dating” 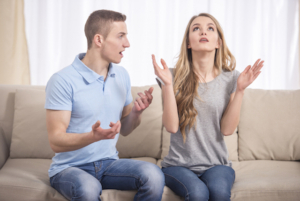 Owning up to Mistakes, and Learning From Them
Be accountable, and take responsibility for your own mistakes.